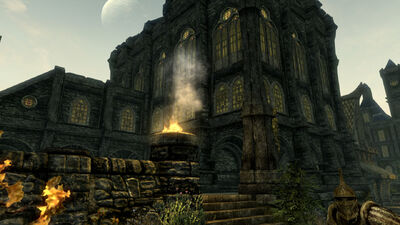 For other uses, see Factions. Factions are organizations of people with a common goal in Skyrim. The Dragonborn can join several of these factions. Upon joining, specific tasks, known as quests, can be administered by a higher-up or leading official of the faction. Each faction has a specific...

I was wondering if there was a limit to the amount factions/guilds you can join. I know for some you can only join 1 such as the empire or the storm cloaks but would it be possible to join for example the thieves guild and the companions?

If you guys play skyrim you must have a favorite weapon , armor set , and spell . But i would like to now your favorite faction so i can find out which faction i should join next .

i mean think about it you can join all the factions all have gerat gear at the end of the questline. most of them have a armour set that is enchaned avilbel early in the game

is it just me or is the dark brotherhood the best starting faction it gives you loads of  gold, access to the best wepon in the game and its not that hard to join

We all know the guilds in Skyrim (except Dawnguard and maybe the Bards College) are pathetic if we compare them to the guilds in previous TES games. So which pathetic guild in Skyrim you hate most and why.

I hate the College of Winterhold and I will tell you why. The basic gist is that, after passing an entrance exam (which consists of casting a novice-level spell for someone), you attend a 30 second lecture and then go on an expedition into a dangerous tomb to hunt for rare, valuable and potentially dangerous artifacts. Plot dictates that you’re contacted by the Psijic Order, a reclusive group of mages from across the world, because for whatever reason they’ve deemed you special. They say that you set a chain of events that can’t be stopped and only you can prevent a future disaster. Later on you find an artifact, and it turns out to be some giant ball of awesomeness that does magic things of an obscure and indeterminate nature. Afterwards, you’re contacted by the Psijic Order again. They tell you that the giant ball of awesomeness is dangerous and offer some vague nonsense about the severity of the situation, but never help you at all. So of course, pretty soon that means the clearly evil Thalmor advisor who was standing around protected by plot armor the whole time, decides to take control of the giant ball of awesomeness and suck out its power, putting a ticking clock that never actually runs out onto the whole affair. In this short conflict the Archmage is killed, followed by his second-in-command.

The most absurd thing about all of it is the extreme pace that everything runs at. There’s no build up to the main quest, there’s no real test for rising through the ranks, there’s no qualification for becoming Archmage save for saving their pathetic hides. You cast that beginner-level spells and then apparently that’s enough magical aptitude to become the Archmage. Nobody in the College does anything to help, except asking you to be their test subject, being their errand boy and offer directions on where you should go. It demonstrates that either the College’s master-level mages are just a bunch of pansies, or that they are so stupid that a novice can outperform them in a matter of days, despite having less magical aptitude than your average tavern owner. There’s also the issue surrounding Winterhold and whether or not the College was directly responsible for the Great Collapse.

A questline to reconcile with the Jarl and even fix the damage to the town would have been way more interesting, especially because they hint and tease at it for so long… instead we get a generic Harry Potter knock-off that struggles to make any sense whatsoever. Bethesda really must be committed to preventing the player from altering the game world in any way. What’s that? The play-testers want to do something of consequence? Hmm… nah, let’s just throw in a few more grinding minigames. Chopping wood is fun, right?

P.S: I will report any post that says "I hate Imperials/Stormcloaks because blah blah blah...". This is NOT a thread to talk about civil war.

Just curious, wanted to know what factions everyone likes the most. I personally love the Thieves Guild and the Dark Brotherhood questlines.

No mods or DLCs'

I don’t know which faction is the “best” morally over another..

I'm new to Skyrim and was just wondering what faction everyone thinks is the best for a beginner. I'm hoping it to be a faction with good reputation unlike the Thieves Guild or the Dark Brotherhood. Thanks :)

Out of curiosity, what three armors are being displayed under the perks tab? I can tell one is the shrouded armor set. What about the other two?

I suppose you should join the Companions first but since I like to play rogues I join the Thieves Guild as soon as possible. Is there a level wise order? What do people you do first and what group do you avoid?  Why? (I don't talk about Civil War)

I can find console comand to add me to faction but what about deleting? I wanna delete myself from DB and Companions.

It appears that nightingale sentinels in the Twilight Sepulcher are all neutral to me and only start attacking if I hit them. I believe something is messed up with my factions, since i experienced similar problems with markarth wizard's guards or whatever they are called (the guards that protect that falmer translation thing you need to get during your Thieves Guild questline), and the Greybeards, who would attack me every time I shouted at them like they asked me (I fixed it by adding myself to their fac). I tried adding/removing myself to/from the following factions: 000DEED5, 000DEED6, but no matter which of these facs i join/leave, the Sentinels remain either neutral or even friendly (don't attack me even if i slice the hell out of them). Help please? And is there a way to completely reset all of the factions disp towards me?

Yes, I know you can "gift" your spouse with vampirism, and recruit followers into the Blades, but it would have been more fun in my opinion if you could make your favorite guilds become stronger by having your followers join them.