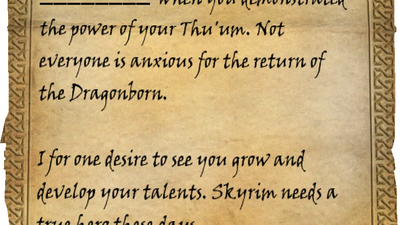 Main article: Books (Skyrim) Letter from a Friend is a book in The Elder Scrolls V: Skyrim. Upon completion of "Dragon Rising," a courier can randomly appear and deliver the letter to the Dragonborn after using a Dragon Shout in any named area. It will point to the location of a Word Wall, which...

While i was on my way to Markarth, i randomly shouted at some butterfly in the middle of the road to pluck their wings (alchemy purpose), by the time i arrived at the stables and as soon as i finished talking with the carriage driver, a courier gave me this letter from a friend.

I was like "what, where the heck is this granite hill 😂😂?"

As far as i know, letter from a friend will be sent to you if you ONLY if you shout in cities, non word wall dungeons and settlements.

Seriously tho, in my thousands hours into Skyrim, i never knew about this.

Has this ever happened to you? 😂 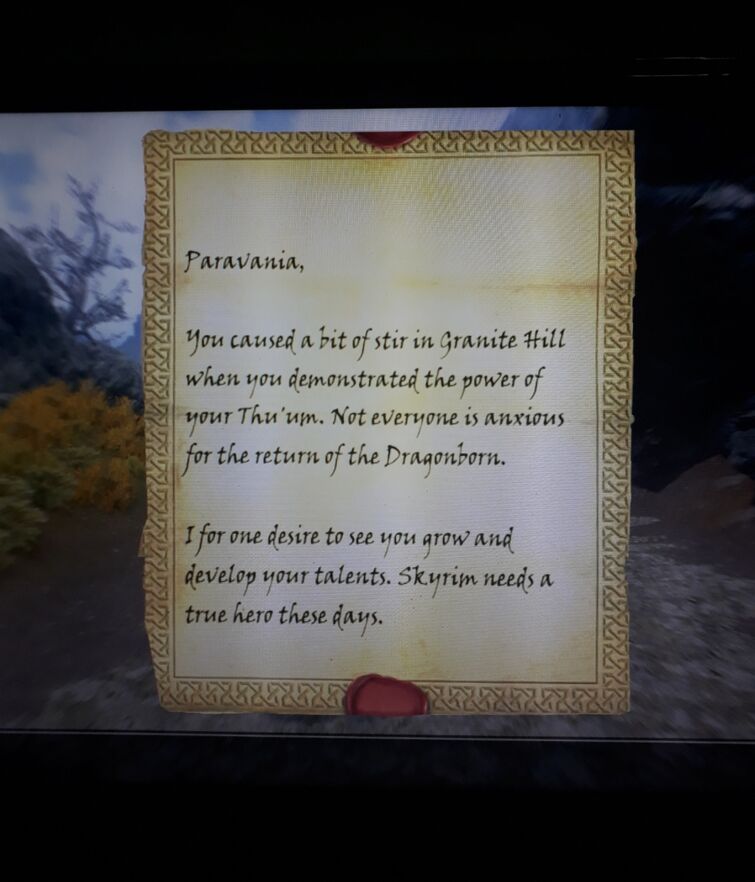 I just started the Way of the Voice, and I got 'letter from a friend' from the Whiterun courier. Can somebody either tell me who this 'friend' is or give me tips on the 'Find the source of power in Angarvunde' objective? I'm really confused about why that's relevant to somebody telling me that they want to see me get better at Shouting.

Letter from a FriendThe Way of the VoiceAngarvunde

I didn’t see anything about this anywhere else but, I was rummaging through Calixto’s house and I saw there wasn’t really a way to get to the barrels across from Calixto’s chest so obviously I shouted to it... I took the stuff from the barrels cause honestly free food right 😂 but then when I left Calixto’s I got one of those « Letter from a friend » quests (Even though I haven’t finished the last letter from a friend quest) but it was talking about my shouting in Calixto’s place and I’m not gonna lie but it kinda scared me 😂 (do i ever find out who sends the letters???)

Now I found out that if you put these letters in any kind of container and open them from there, they are completely blank and will stay like that forever! Now I accidentally opened new "Letter from a freind" like this and I screwed up, because it gave no Undiscovered location, no quest, no text...it's like this bug completely erases the script command as well...i tried searching around on various pages but I didnt find anyone with the same problem...pls help

(edited by moderator)
Letter from a Friend

The first time I encountered this, it was after i had Unrelenting Force'd most of the thieves guild and bolted after i stole some cheese from them. The courier arrived with the letter right after i left the ratway, roughly 6-7 in-game minutes later

(edited by moderator)
Letter from a Friend

I got a "Letter from a Friend" that said I caused "a bit of stir in The Aetherium Forge" with my become ethereal shout to get the chest form the other side of the lava pool, during "Lost to the Ages" XD

Note:I didn't kill the bandits at Bthalft, I just calmed them because I was lazy :V

I did a shout in my homestead, lakeview manor and when I stepped outside the courier gave me a letter that said I caused a bit of a stir in my own home. Pretty funky glitch, huh

Right, so the problem is this:

I am unable to receive the "Letter from a Friend" for some reason, with my new character.

I am not currently searching for a word of power, and have been shouting constantly in various settlements. Guards ask me to stop, but i dont receive a letter from the courier shortly afterwards.

I don't have any stupid mods that could cause problems with the script or anything, so i don't understand why this is happening.

I don't know why, but I never received this letter ):

(edited by Violentmadness)
Letter from a Friend

Its actually the blades that send you the letters as they were once dragon slayers and after the emporers death many years ago they returned to skyrim to help against the dragons they do infact contact you midway through the main story and explain about the letters.

The courier will say to you that he isn't sure who sent the letter, just that HE was a friend of your's. So I believe it's either a Psijic Monk or someone else. Maybe one of the Greybeards?

I had hoped that this would be revealed in a future DLC, but since we know that's not going to happen, I'm going ask: who the hell sends you the letters with the locations of words of power? Delphine? The Couriers say it's a man. Esbern? He hasn't left the Ratway. One of the Greybeards, maybe? Does anyone know who sends them?

When  i got the letter, i heard a loud "Boom" and a voice saying "Dovahkiin" what was this? Is this supposed to happen?

could he Be a member of the blades hiding from the thalmor, a random cultist, the greybeard, a adrra  or even a dragon preist all thoughts and opinions welcome

who is the friend?Only Bathesda knows i think its the gray fox(thives guild leader) becuse in oblivean the first time you go to jail you will recive a note from A FRIEND that is when you can join the thives guild at the end of the thives guild quest line you will recive another note. you you can finaly meet him even though i havent compleat the whole quest line i have seen other people play so i think i have enough info about about it if you have other ideas about who the friend is plz reply:)

The letter from a friend doesn't appear until the completion of dragon rising. This mean's the "friend" only believes you're dovahkiin after you've met the greybeards, so then it is my belief that one of the greybeards is sending these letters based on

A) The Greybeards are the one of the few groups of people capable of hearing the Dovahkiin's shout anywhere across Tamriel. (they heard it easily enough from western watch)

B) They would be most knowledgable of the wherabouts of word walls, as they can hear the resonating echoes of the walls (as shown by arngeir's ability to tell you wear they are. "we have heard a whisper...")

the interest point is that Arngeir is probably not the one sending the letters, I believe this based on the fact that he wants to temper your training to a certain speed and reveals the locations of word walls whenever you've found a previous one. the "friend" similarly will not reveal a new location until you have found the last one, but for arngeir to be revealing two locations at a time seems a bit strange. what do you think, who is the Dovahkiin's mysterious "friend"?

~I have considered Delphine as she signs her note "A friend" after having stolen the horn of jurgen windcaller, and is reasonably paranoid enough of her note being discovered by thalmor, and wouldn't want her location tortured out of a courier if her name was on it. she is extensive in her research but she would not have known whon the dovahkiin was before the completion of "the horn of jurgen windcaller" and she would most likely not know the exact location of word walls