Molag's Bushy Eyebrows, it is extremely difficult as a Vampire Lord! Already the Vamp side was being difficult because fighting Dawnguard is actually pretty hard, but Harkon was just super, super hard. We were at a stalemate for almost a half hour just endlessly draining each other, summoning Gargoyles and slapping each other. I also had to change forms to use Auriel's Bow to pop his bubble, which wasn't fun in a room full of skeletons. Eventually after a solid minute of slapping each other in the face, I finally won because I had gotten the Night Cloak perk, and so I was constantly, but very slowly draining his health while slapping him.

(edited by The Mechanical Menace.)
Harkon

The story I'm working on currently, set to be out by Skyrim's 10 year anniversary, which is basically a revamp of Skyrim with new environments and Tiber Septim as the primary antagonist instead of Alduin, so it required a different alternate Skyrim because frankly I don't need my story to be about fetch quests or dungeon delving. So, in leu of that I've drawn the version of Skyrim that will feature in my story.

Different landscapes and cities, and many elements removed. So I guess it's not even Skyrim anymore technically but some stuff is still reminiscent. I essentially took Skyrim and made it a blank canvas and filled it with my own ideas. Because I didn't find the Skyrim in game that fascinating. It was very quantity over quality and I've remedied that for my story; Suicidal Neurosis. Which is again, an alternate reality version of Skyrim.

Ill also include pictures that aren't mine but I'm using as concepts for locations.

Map of My Alternate Skyrim: 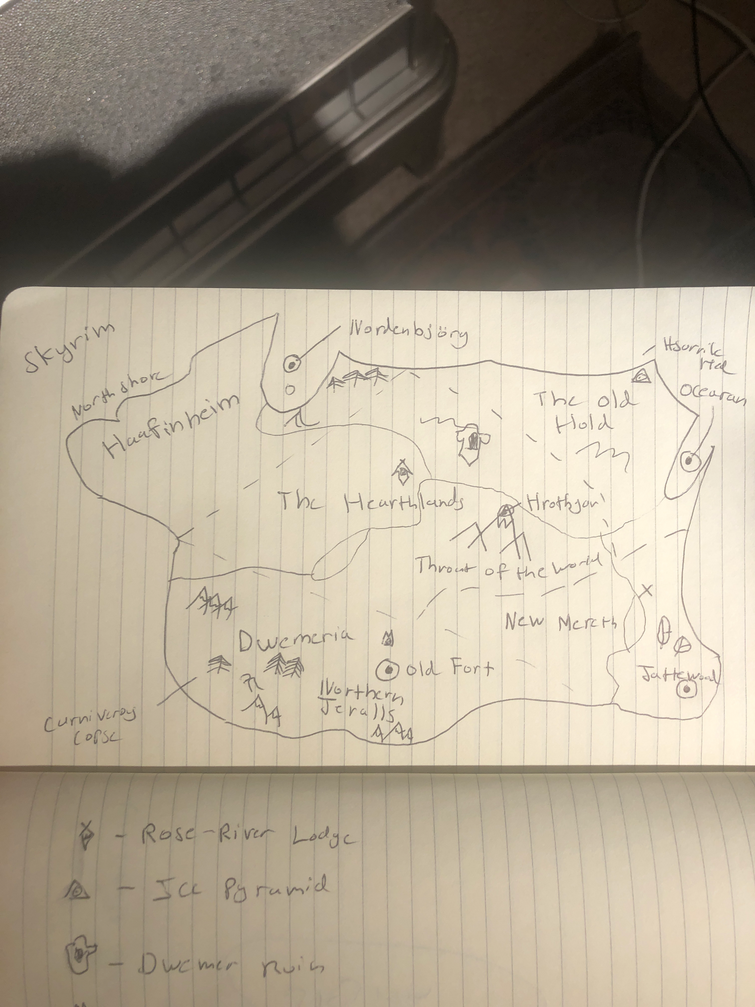 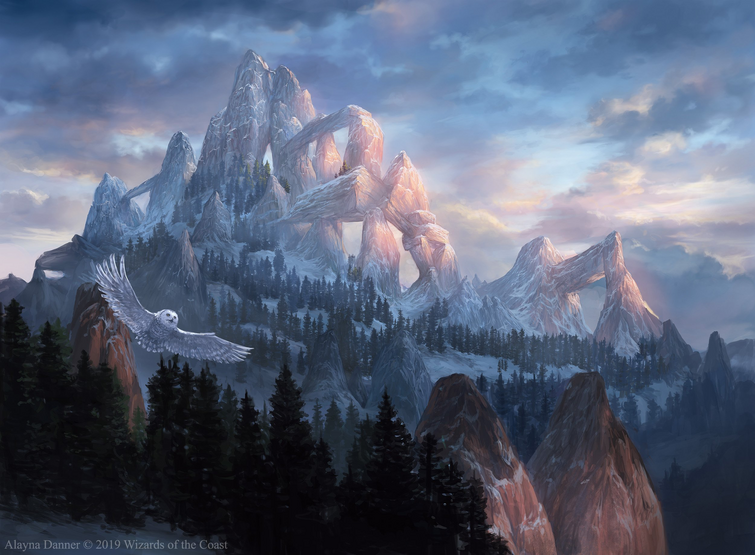 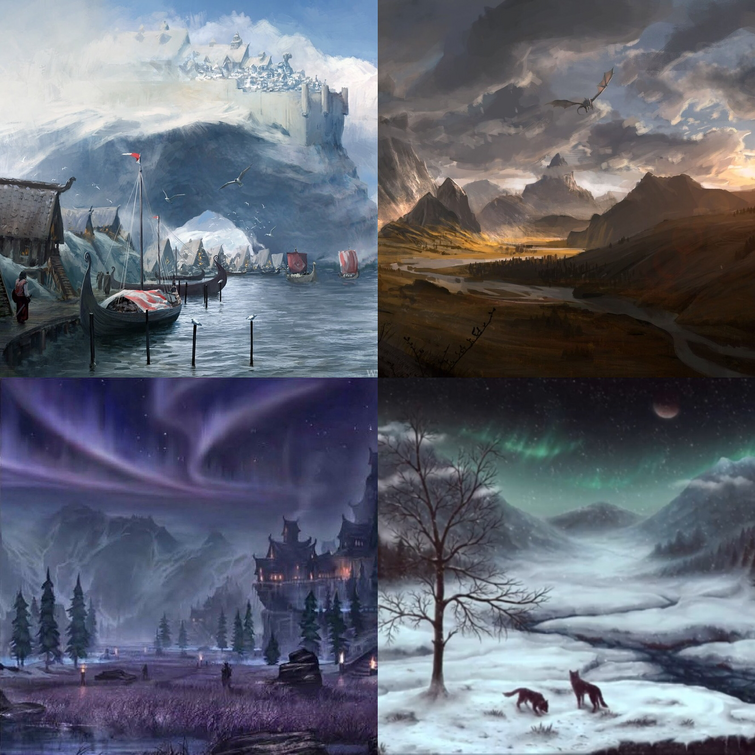 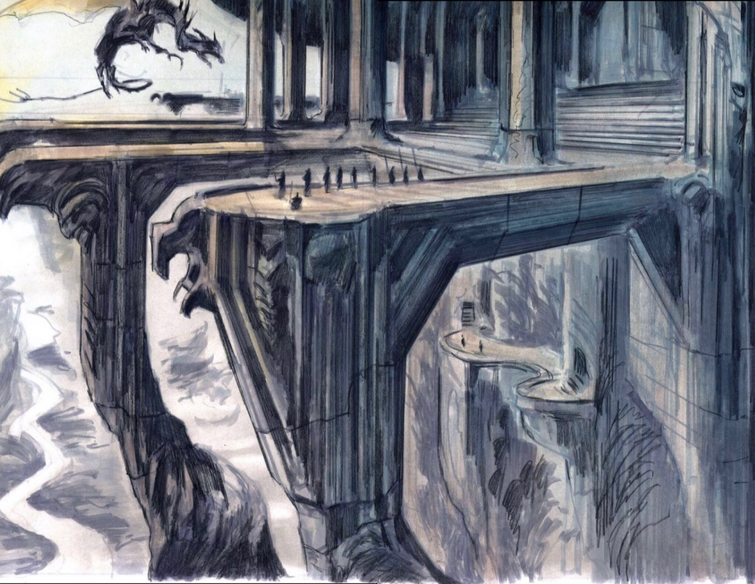 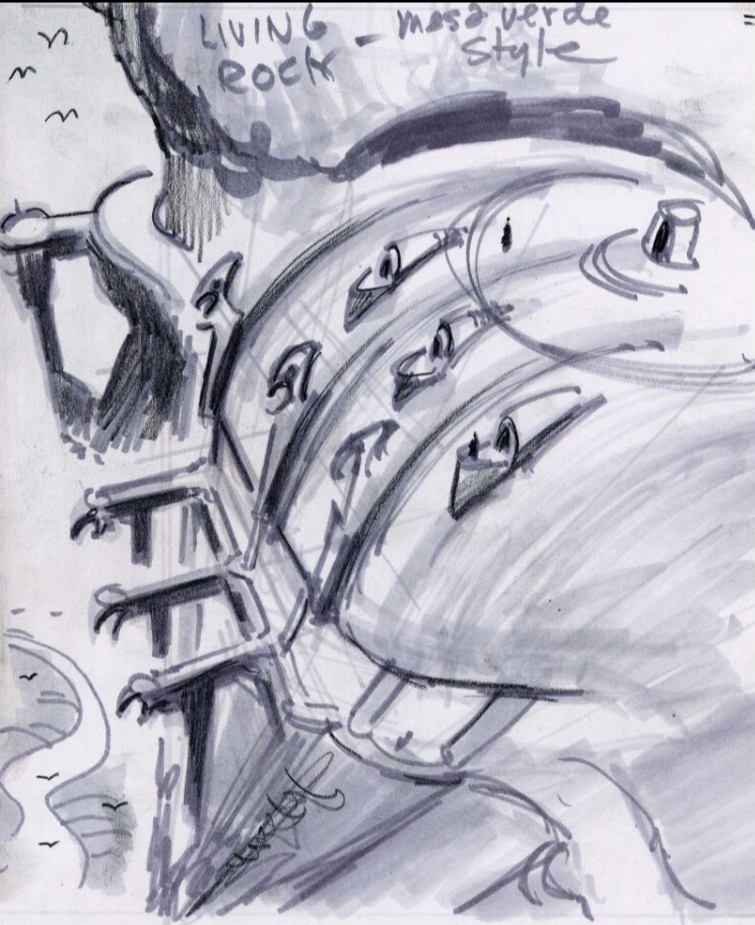 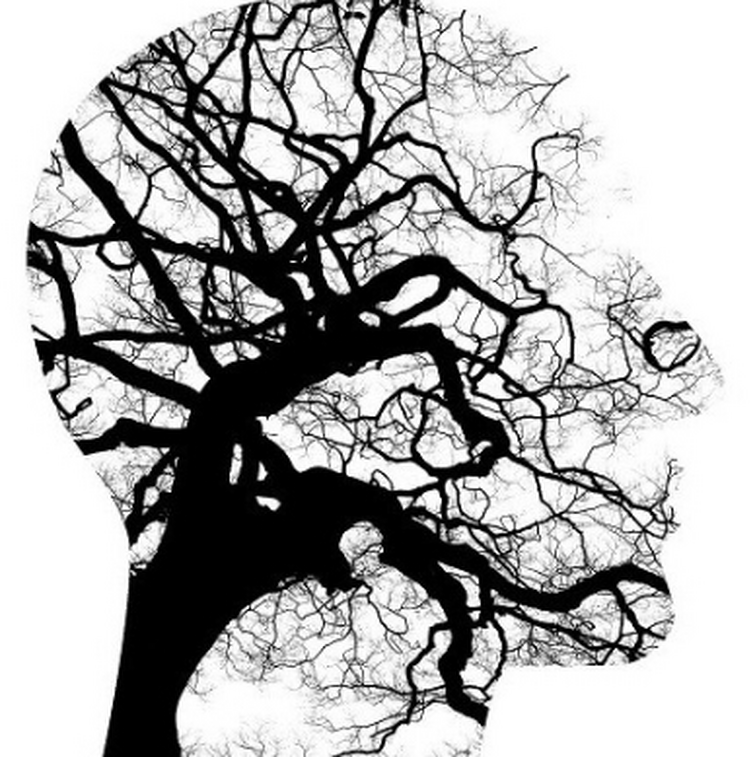 I mainly made this post for myself but I decided to share it with anyone interested. Feel free to post thoughts or questions. Just don't be condescending or rude. I have my reasons for doing what I'm doing. 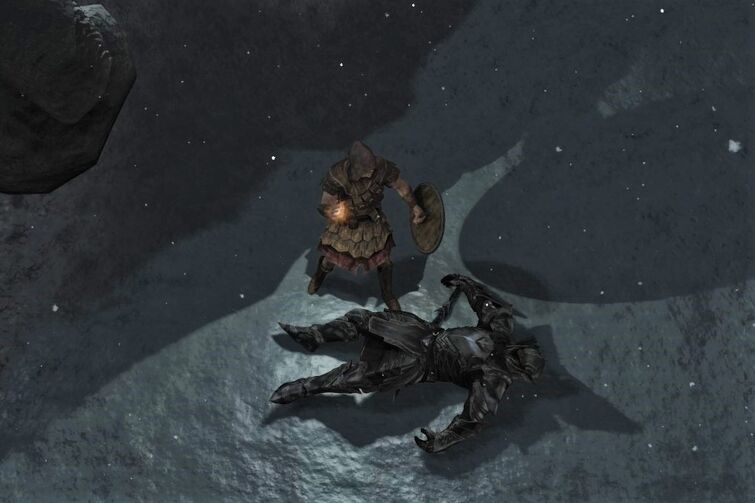 In the past I've beaten the Ebony Warrior in a fistfight by first pickpocketing all his weapons, and I've also managed to beat him by reverse pickpocketing very powerful gear onto a nearby bandit and having them fight it out. So, I enjoy finding creative ways to kill this guy, and this time around I did it with nothing but an old guard shield.

It was quite simple really. I just shield charged him down the mountainside and bashed him once before his health could regenerate. Not really the most heroic way to go for the poor guy 🤭 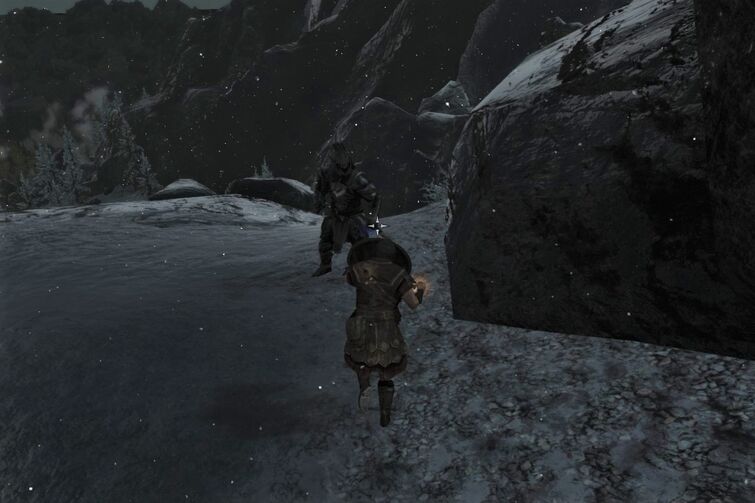 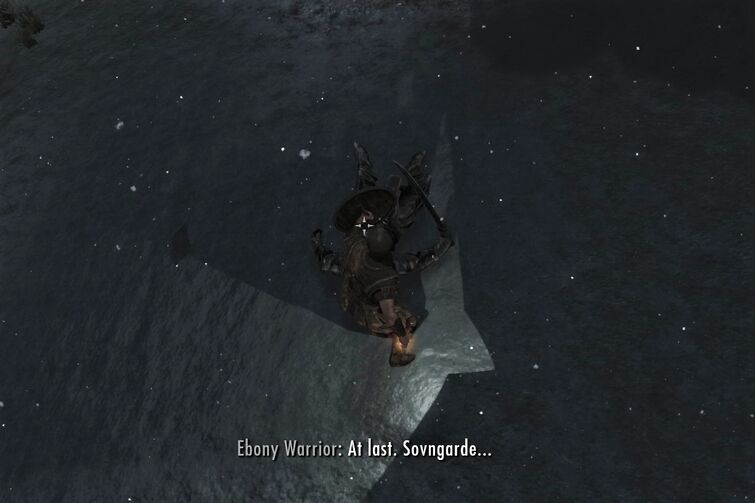 Worth a try... | FandomMy latest endeavor was an attempt to kill the…elderscrolls.fandom.com

I'm like 70% sure it's supposed to sound like Abraham Lincoln but I want to know what the peoples think.

How do you get Conjure Foul Zombie from the Creation Club Zombie DLC? Ive made characters up to lv60 and haven't found it anywhere.

Jam is a Nord born somewhere in Nirn we don't know where.

Jam was caught by the imperials trying to go to Skyrim, he escapes Helgen with Ralof then completely abandons trying to join the Stormcloaks. He has better things to do.

Jam ran to Markarth and joined the cannibal cult there but he soons discovers that human flesh doesn't really taste good. Jam goes to Whiterun to become a courier. In this time of war what do people need? Letter sent to their loved ones far away, and so Jam delivers those letters.

Jam's full title and name is Jam The Nord Courier Who Runs Barefoot because he doesn't believe in shoes, whenever he is arrested for unspeakable actions and the guards force him to wear footwraps he screams and throws them at the guards, prolonging his sentence.

This has been the story of Jam The Nord Courier Who Runs Barefoot.

I've decided to play through the game again, with mods of course. And I decided to share a few really good ones for Xbox Special Edition that I simply can no longer play without.

I don’t know about you all but I absolutely cannot play Skyrim without these mods. They are beautiful and unique and make the game very enjoyable to Playthrough. Sometimes it feels like I’m playing Skyrim for the first time again when I find something new. If anyone has any suggestions for mods I should give a try please do tell in the comments cause I would love to try them. Keep in mind that I play Xbox though

Hey guys this build is based on a movie called shrek now you must be thinking oh he musta meant to say something well your wrong . i will give you a couple task to do so you know what to do .

Task number 1 : name yourself shrek or some shit like the hulk . and you have to be an orc and make him so ugly to were orc strongholds wont let you in .

Task number 2 : buy some horse and have it follow you for the rest of the game .

true nord that you are .

Task number 3 : meet the love of your life and make her marry the ugly piece of shit your character is . you can have kids if you want but just pick wisely

task number 4 : kill grelod the kind so you can free those orphans they are the true heros

This might only work in Skyrim since that's the only TES game I play.

Step one: Acquire a kettle, steal it, buy it, get a kettle. It'll work as long as it's bigger than your feet, but again I don't know how small they get.

Step two: Place your kettle where you want to fly, try flying up to High Hrothgar. Make sure it isn't upside down or on it's side.

Step four: Jump in the kettle while sneaking.

Step five: Get up from crouching and drag it.

You can only go up on a kettle, if you want to get off just jump off, you will take fall damage most of the time. Hope this was helpful.

If you could change anything about it, what would it be?

Personally I'd want to work alongside Vahlok the jailer, maybe have him teach you about miraak and his history, maybe even the cult, do quests for and with him

So after seeing another guy on here post this, I was inspired to do it, but it would be more in story format to differ from the original one.

Would anyone be interested? I'll try to be as detailed as possible

I’m my play through I recently became a werewolf curing my vampirism, does anyone know were in Castle Volkihar she is?

I have came across few people that give me the option to ask if they want to move Into new place. Once picked, they ask if someone is there & the dialogue ends. Has anyone else able to check this out?? 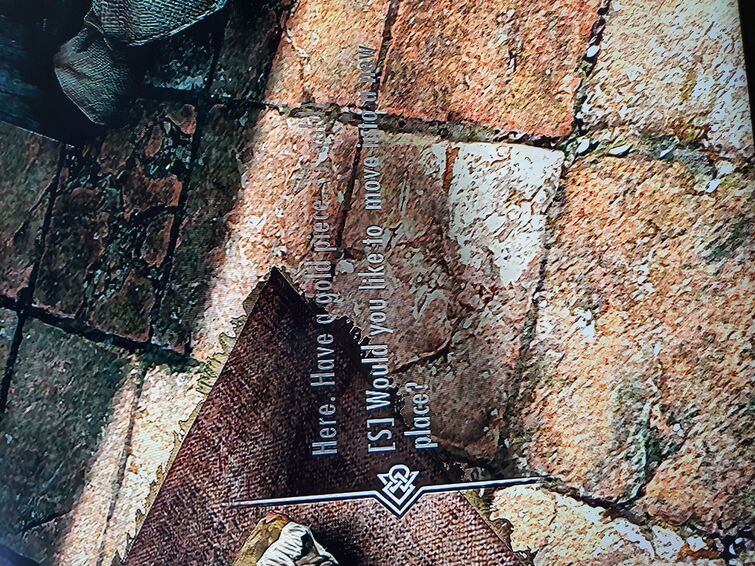 Trying to get the Xbox saves to pc and then back to Xbox but modio just will not recognise the usb. We’re trying to transfer Skyrim save files as one of the masks disappeared and were wanting to get it back.

Anyone know how to get it to work, the usb is FAT32 and we’ve managed to get the save to pc but we can’t get it to the Xbox because it needs to recognise the usb in order to do that but it just won’t recognise it

Hey guys i've recently started using mods again on skyrim and then it got me wondering what is your guys favorite .

My favorite skyrim mod is the better graphics mod see 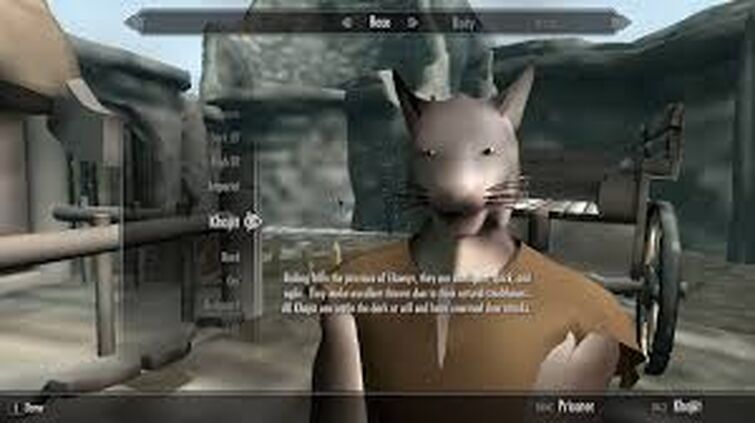 After all these hours in this game i just discovered there is a spell that can turn iron into gold.....are there anymore rare spells i should know of?