The Crowns
Restless League
A'Tor was a Redguard who was the son of the last High King of Hammerfell, King Thassad II. Following his father's death, he led the Crowns against Baron Volag in the Hammerfell Civil War, but was mortally wounded during the Battle of Hunding Bay.

During Tiber Septim's conquest of Tamriel, he invaded the homeland of the Redguards, Hammerfell. A'Tor, along with his father, initially bravely resisted Tiber's military advances. With Thassad's death, however, the Crowns and the Forebears split over the issue of independence from the Septim Empire. Under A'Tor, the Crowns took a strong stance against joining with Cyrodiil and favored continued independence. Their rivals, the Forebears, however, wanted to gain the economic and military benefits associated with joining the Empire. Thus a civil war broke out.[1]

A'Tor, as King Thassad's heir, led the Crown war effort against the Forebears. Using tactics learned from his father and his generals, A'Tor was wildly successful in driving back the Forebears, defeating their leader Baron Volag on numerous occasions. The young prince's military successes, however, also brought his downfall. The Forebears, fearing defeat, invited Tiber Septim to lead his Imperial Legions in to stop the Crown advance. Heavily outnumbered and outsupplied, A'Tor's tactics no longer proved effective and his forces were driven back to the main Crown base on the island of Stros M'kai. In the ensuing battle, A'Tor and the majority of his warriors were defeated by the Imperial Legion under Admiral Amiel Richton. A'Tor was killed by a poisoned arrow of the assassin Dram.[1]

A'Tor's soul was then put into a soul gem. This soul gem was fashioned into an amulet and came into N'Gasta's possession. Cyrus took a job offer to deliver the amulet from N'Gasta to Amiel Richton in exchange for information about his sister, Iszara. When returning the amulet, Richton denied knowing any info on Iszara prompting Cyrus to threaten him, resulting in his imprisonment. The soul gem was then put in the treasure vaults and put under guard by the dragon Nafaalilargus. Cyrus escaped and managed to find his sister. He then learned that the amulet was actually a soul gem and set out to retrieve it. He killed Nafaalilargus and took the soul gem from the vaults.[2]

A'Tor's body, however, was saved by his battlemages and the priests of Arkay, where it was being kept in the Temple of Arkay. Saban then took the soul gem and used a spell to attempt to resurrect Prince A'Tor's body with it. The spell worked, but the prince instead chose to have his soul enchant his sword. This sword became known as the Soul Sword and contained Prince A'Tor's mind and spirit. The sword could think and move on its own and guided Cyrus to his former palace. Cyrus used the sword in combat against the guards, Dram, and Amiel Richton. After defeated Richton, Cyrus was tricked and forced to drop the soul sword. The soul sword then flew up and stabbed Richton and Dram.[2]

Following the defeat of the Empire on the island, the soul sword then came into possession of Iszara and later became a symbol of the Crowns and Restless League.[2]

A'Tor in the opening sequence.

Cyrus sees his face on the preserved body of A'Tor in the Pool of Mysticism. 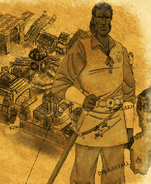 Español Français Italiano Polski Русский
*Disclosure: Some of the links above are affiliate links, meaning, at no additional cost to you, Fandom will earn a commission if you click through and make a purchase. Community content is available under CC-BY-SA unless otherwise noted.