Legendary
Fill the left lane with Stormcloak Skirmishers or the right lane with Colovian Troopers.

A Land Divided is an action card in The Elder Scrolls: Legends that is a part of the Heroes of Skyrim expansion.

By playing A Land Divided to the right lane, 2/2 Colovian Troopers with Guard will fill the lane, summoning a maximum of four. If Imperial Camp is in play, the Colovian Troopers will receive +1/+0 allowing them to deal more damage to enemies. Filling the lane with Colovian Troopers can effectively prevent or greatly delay an opponent from directly attacking the summoner, even with powerful creatures. As such, this can be advantageous if the right lane is filled with many powerful enemies. 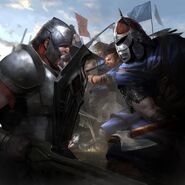 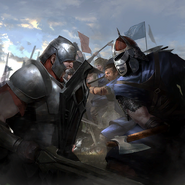 Retrieved from "https://elderscrolls.fandom.com/wiki/A_Land_Divided?oldid=3072422"
*Disclosure: Some of the links above are affiliate links, meaning, at no additional cost to you, Fandom will earn a commission if you click through and make a purchase. Community content is available under CC-BY-SA unless otherwise noted.