A Tale of Two Mothers

A Tale of Two Mothers is a quest available in The Elder Scrolls Online: Summerset.

A distraught mother named Lanarie cannot find her son, Arathel. The youth surrendered to the authorities—saying he was part of a plot to kill a Sapiarch. But he disappeared from his cell shortly thereafter. I promised Lanarie I would find her son.

In order to start the quest, approach Lanarie outside of Kinlady Avinisse's Mansion in northeastern Shimmerene. When spoken to, the following conversation will commence:

Lanarie will direct you toward Talerion in the basement of the mansion opposite from where the quest was started. He can be found in the basement, looking at the "Broken Passage" to the Shimmerene Waterworks. When approached, the following conversation will begin:

Head upstairs to the ground floor and enter the room with the door to Kinlady Avinisse's Garden. Arathel's Map may be found on an end table next to a chair sitting in front of the fireplace. When examined in the inventory, the map will have the following description: 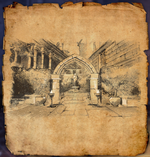 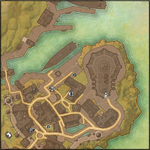 Arathel's Map (left) and where to find the location it points to (right).
A faithful reproduction of Arathel's map. It clearly points to a location in Shimmerene.

The map appears to show an arch with hedges to either side. Past the arch is a statue on a pedestal, and in the very back of the image is a balcony overlooking the area. Buildings extending beyond the top of the map can be seen on either side.

The location the map shows is a secluded hedge maze near the Shimmerene Dockworks. Exit Kinlady Avinisse's Mansion, head down the steps and around the bend, and then bear right at the fork by Orninlusea's performance. Follow the road straight until reaching a branch of the stall The Ruins Bazaar, near the Anchors Aweigh Inn. Then turn right (northeast) and follow the road until reaching the hedge maze. It should be adjacent to a table which Snabugha, Lairiwene, Quorarion, and Elianne Alfena are surrounding.

Enter the maze itself and turn right and follow the hedges. After a couple of turns, you will see a scroll lying on the ground. You need to read it. After that you will have two options to continue this quest: either tell Talerion about the contents of the letter or go to Riharai in Anchors Aweigh Inn.

If spoken to Riaharai, she will send you to talk to the hooded man on the second floor of the Inn. Between Edgar Jend and the Vestige, the following conversation will take place:

You will then have to go to the city waterwarks and follow the rat. Eventually, you will get to the Mother's Den sublocation. There you will talk with the Mother of Rats:

To help find out where Mirulon helds Arethel, she will tell the Vestige to search for Zan'hi, a Khajiit under command of the Mother of Rats who spies on Mirulon. Zan'hi will be located in the cavern in the southwestern part of the waterworks.

When approached, the following conversation will take place between Zan'hi and Hedani:

The Vestige has to talk to him:

It is revealed that Mirulon wants to bend Arathel's mind and make him kill the Sapiarch. The Vestige goes deeper into the caverns. When he approaches the Mirulon's chamber, the following conversation takes place between Arathel and Mirulon:

After entering the chamber, Mirulon can be seen standing in the centre and Arathel running away.

Mirulon: "So the rat queen sends her vermin to destroy me? Come then."

After the battle, the evidence should be retrieved nearby. Then the Vestige should proceed to the Aquaducts and talk to Arathel.

Arathel will then have to be escorted to the Mother's Den. At the time of the arrival, it is revealed that Talerion has found this location. A small conversation will take place:

Arathel: "Mother!"
Talerion: "Hold there, Arathel! By order of Divine Prosecution!"
Edgar Jend: "Easy, guardsman. This boy is under our protection."
Mother of Rats: "All of you, quiet! Have a word with our mutual friend, Talerion ... if you want the truth that is."

Some of the characters present can also be talked to:

An evidence should be presented to Talerion:

"So ... it's you. When you didn't return I assumed you had abandoned you search. What are you doing here?"

Arathel's innocent. An evil sorcerer tried to use him to kill the Sapiarch, but the boy refused. "Ah, the oft-used "a wizard made me do it" defense. It's an excuse I've heard before. Many, many times. Do you have a proof, or is this all fanciful conjecture?"

I have proof. I found this among the captor's belongings. "Hmm. It seems this Mirulon played a role in a much wider conspiracy. Troubling. I will take this to my superiors. As for the boy, he can go free. For now. A word of advice: avoid these urchins and apraxics. They are nothing but trouble."

After the evidence of his innocence is presented to Talerion, the Mother of Rats will thank the Vestige for his actions:

After the quest conversation:

Talerion: "Take notice, sewer-dwellers. I know where you are. Keep your affairs in order or our next encounter will be far less pleasant."
Lanarie: "Thank you so much for finding Arathel. Bless you!"
Arathel: "I think I might want to be an adventurer too!"
Lanarie: "No. You've had enough adventure for one lifetime."

Retrieved from "https://elderscrolls.fandom.com/wiki/A_Tale_of_Two_Mothers?oldid=3033322"
*Disclosure: Some of the links above are affiliate links, meaning, at no additional cost to you, Fandom will earn a commission if you click through and make a purchase. Community content is available under CC-BY-SA unless otherwise noted.