For the same location in Oblivion, see Sideways Cave.

"It is done. King Anumaril's entire family is put to the sword, and Abagarlas itself destroyed by the righteous lightning of Meridia."
―Curano[src]

Abagarlas is an Ayleid ruin of the former city in the province of Cyrodiil.

Abargarlas was an Ayleidic city-state located in the Heartlands of Cyrodiil near its rival city-state known as Delodiil. Abargarlas was a city with a very militaristic culture, having a large population of warriors. Though there wasn't much economical opportunity within the city, most of its citizens made a good living as mercenaries.[1]

The people of Abargarlas worshiped the god Molag Bal and built a massive temple in his honor; due to the lack of artisans and other specialized peoples though, the temple was misshapen and ill-colored. The mad King of Abargarlas was very jealous of the beautiful temple that the people of Delodiil built to honor the god Merid-Nunda, and vowed to destroy the city and sacrifice all of its citizens to Molag Bal. But when the armies of Abargarlas arrived at Delodiil the entire city was gone, citizens and all. When the King returned to Abargarlas he found the city completely destroyed.[1]

The guildmaster recruits the Vestige to fight Daedra in Abagarlas, home of necromancers and Molag Bal worshipers. They realize that Molag Bal is keeping the Mortuum Vivicus in Coldharbour and the Worm Cult is harvesting souls to feed it. 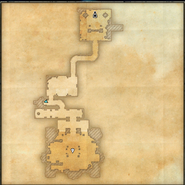 Retrieved from "https://elderscrolls.fandom.com/wiki/Abagarlas?oldid=2971328"
Community content is available under CC-BY-SA unless otherwise noted.