cards: Sacrifice Abandoned Imperfect to summon an 8/8 Awakened Imperfect with Guard and Breakthrough to the lane of your choice.

Abandoned Imperfect is a support card in The Elder Scrolls: Legends that is a part of the Return to Clockwork City expansion.

It will be easier for Abandoned Imperfect to be replaced with Awakened Imperfect if the summoner has more Neutral cards in their deck, increasing the chance for one to be drawn and, thus, lessening the time it may take to draw three. As a Support card, Abandoned Imperfect cannot be affected by the Lethal keyword or Actions that damage only creatures. Some cards, however, such as Edict of Azura, can unavoidably destroy Support cards. 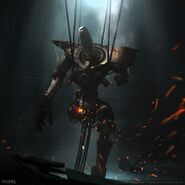 Retrieved from "https://elderscrolls.fandom.com/wiki/Abandoned_Imperfect?oldid=3072488"
*Disclosure: Some of the links above are affiliate links, meaning, at no additional cost to you, Fandom will earn a commission if you click through and make a purchase. Community content is available under CC-BY-SA unless otherwise noted.