For other uses, see Abandoned Mine.

The Abandoned Mine is a rundown and abandoned Imperial mine that is located in the Nibenay Basin, northeast of Lake Canulus.

After its abandonment by its Imperial owners sometime prior to the Oblivion Crisis, the Abandoned Mine became the home of a group of bandits who raided the surrounding countryside. Noted for its abundance of rich veins of gold and silver, it is located near the city of Bravil, and had presumably been owned by the Count of Bravil.

The shade provided by the outcropping that allowed entrance to the Abandoned Mine provided many plants, including Foxglove, Green Stain Cup, Monkshood, Motherwort Sprig, and Summer Bolete, with the right amount of soil needed for them to successfully and abundantly grow around the mine. Mudcrabs, dogs, and rats are some of the creatures that made the Abandoned Mine their home after its abandonment by Bravil. 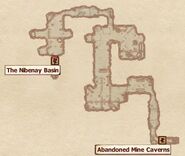 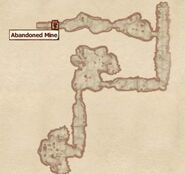 Abandoned Mine Caverns
Add a photo to this gallery

Retrieved from "https://elderscrolls.fandom.com/wiki/Abandoned_Mine_(Oblivion)?oldid=2977442"
*Disclosure: Some of the links above are affiliate links, meaning, at no additional cost to you, Fandom will earn a commission if you click through and make a purchase. Community content is available under CC-BY-SA unless otherwise noted.