For other uses, see Abnur Tharn.

Abnur Tharn is a creature card in The Elder Scrolls: Legends that is a part of the Alliance War expansion.

Abnur Tharn allows the summoner to choose any creature on the board, including enemies, and use its Summon keyword. Abnur Tharn is strategically flexible, as the Summon effect that is duplicated can be to summon more creatures, draw cards, deal damage, and various other effects depending on what creatures with the Summon keyword are on the field.

Abnur Tharn can effectively have a creature summoned before him with a Summon keyword triggered twice in a single turn that can be used for any number of advantages depending on the desired strategy and outcome. Abnur Tharn can also turn an opponent's strength into an advantage for the summoner, activating their own Summon effect which may be particularly useful on higher-cost and late-game enemies with stronger effects. 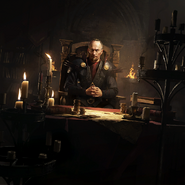 Card art.
Add a photo to this gallery

Retrieved from "https://elderscrolls.fandom.com/wiki/Abnur_Tharn_(Legends)?oldid=3072430"
*Disclosure: Some of the links above are affiliate links, meaning, at no additional cost to you, Fandom will earn a commission if you click through and make a purchase. Community content is available under CC-BY-SA unless otherwise noted.