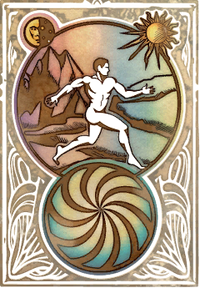 For other uses, see Acrobatics.

Acrobatics is a stealth arts skill that affects the Hero's ability to jump. The higher the Acrobatics skill, the farther and higher the Hero can jump, and the more likely they can avoid or lessen the amount of damage after falling great distances.

"After long, arduous hours of practicing jumping and controlling your falls, you have became an Apprentice of Acrobatics. You can now attack while jumping or falling. However, you cannot use power attacks while in mid-jump or mid-fall, only regular attacks."
―Apprentice Level

After long, arduous hours of practicing jumping and controlling your falls, you have become an Apprentice of Acrobatics. You can now attack while jumping or falling. However, you cannot use power attacks while in mid-jump or mid-fall, only regular attacks.

After long, arduous hours of practicing jumping and controlling your falls, you have become a Journeyman of Acrobatics. You now have the Dodge ability. Blocking while jumping makes you dodge in the direction of the jump. You will do a tumbling roll and possibly avoid an attack.

After long, arduous hours of practicing jumping and controlling your falls, you have become an Expert of Acrobatics. Now it costs half as much fatigue to jump.

You have become a Master of Acrobatics. You gain the Water Jump ability. Jump just as you touch the water, and you can jump again as if it were a solid surface. Miss your timing... and fall into the water. With practice, you can jump several times in a row all the way across a body of water.

Once the Acrobatics skill level reaches 70 or higher, NPCs will say, "You've got a real bounce to your step, I bet you're quite the acrobat."

Acrobatics is useful when escaping enemies by jumping to where they cannot go. It is also a nice resource when helping to raise one's speed stat, which in turn helps one's light armor rating. However, a lot of dungeons do not have any safe places to jump to in order to get away from opponents. Fortunately, many dungeons have alternate routes that are only accessible via a very high Acrobatics skill. These alternate routes allow for a skilled acrobat to run the dungeon in reverse and get to loot quickly. Also, while attacking, it is useful to be able to jump over enemies or fall from heights that will kill them if they follow. It can also be used to travel faster, because it is possible with Acrobatics to jump on buildings and similar obstacles.

Retrieved from "https://elderscrolls.fandom.com/wiki/Acrobatics_(Oblivion)?oldid=3089454"
*Disclosure: Some of the links above are affiliate links, meaning, at no additional cost to you, Fandom will earn a commission if you click through and make a purchase. Community content is available under CC-BY-SA unless otherwise noted.