The Fall of the Dark Brotherhood Non-Collectible

Ageless Vampire is a creature card in The Elder Scrolls: Legends that is a part of The Fall of the Dark Brotherhood expansion.

Whenever Ageless Vampire deals damage, it provides that amount of damage back to the summoner as health. With a starting value of five power, Ageless Vampire will provide the summoner five additional health each time it attacks, greatly increasing survival. This can be further increased by using effects, including Items, to increase its power. 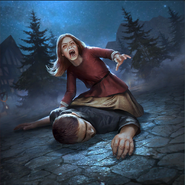 Retrieved from "https://elderscrolls.fandom.com/wiki/Ageless_Vampire?oldid=3072684"
*Disclosure: Some of the links above are affiliate links, meaning, at no additional cost to you, Fandom will earn a commission if you click through and make a purchase. Community content is available under CC-BY-SA unless otherwise noted.