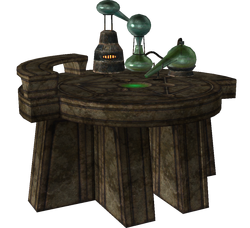 For other uses, see Alchemy Lab.

An Alchemy lab is where the player practices Alchemy in The Elder Scrolls V: Skyrim. In the alchemy lab, the player can create potions and poisons, and test the effects of ingredients. The Dragonborn is prompted with the choice of adding two ingredients, and an optional third ingredient for the desired effects. While testing and creating potions, the player learns potion recipes, which allow the player to select the recipe and create the potion without having to mix those two or three ingredients again, though the ingredients required initially are still consumed.

The Lab can be crafted for a homestead as part of The Elder Scrolls V: Hearthfire. It requires the following components: 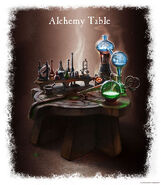 Deutsch Español Français Русский ไทย
*Disclosure: Some of the links above are affiliate links, meaning, at no additional cost to you, Fandom will earn a commission if you click through and make a purchase. Community content is available under CC-BY-SA unless otherwise noted.
Advertisement