"I have no hatred for the races of Man, but they are young. Like all children, they are driven by emotion. They lack the wisdom that comes with age. I would sooner place an Altmer infant on the Ruby Throne than surrender Tamriel to their capricious whims. The Altmer, the Bosmer and the Khajiit share the common traits of intelligence, patience and reason. We do not seek riches or plunder. Domination is not our goal, nor is the acclamation of power for its own sake. Today we make our stand. Today we take back the Ruby Throne, which is ours by ancient right and the blessings of the Divines. Stand with us."
―Ayrenn Arana Aldmeri[src]

The Aldmeri Dominion was formed sometime between 2E 580 and 2E 582 by the Altmer (it can also be referred to as the 'brainchild' of Queen Ayrenn). They were afraid of the disaster that the younger races could bring to Nirn. After the news of the Imperial City being taken over by Molag Bal worshippers had reached Summerset Isle, the Altmer reached out to their old allies, neighboring races—Bosmer and Khajiit. As they had done many times before, they swore that with the combined forces of the three races, they shall prevent the disaster that was to come.[UL 1]

Convinced that the younger, less sophisticated races have dominated Tamriel too long, the Dominion seeks to right the course of history. The cultured and typically reclusive Altmer have emerged from their ancestral home of the Summerset Isles alongside the Bosmer of Valenwood and crafty Khajiit of Elsweyr to usher in a new era of peace and law.

The Dominion was formed in an attempt to take control of the Imperial City and restore Elven rule to Tamriel. It is said that the three allied races were the most intelligent, patient and rational in all of Tamriel. Members of the Aldmeri Dominion believe that the short-lived and young races of Men are unfit to rule, and that this role is meant by the Divines to be filled by the Aldmeri Dominion itself.[UL 1]

The Aldmeri Dominion stretches over the provinces of the Summerset Isles, Valenwood and Elsweyr. Its capital is Elden Root, hidden deep within the forests of the Bosmeri Valenwood. The faction is led by Queen Ayrenn.[UL 1]

The Aldmeri Dominion is led by the young Queen Ayrenn and governed by the Thalmor, a collection of Altmeri Canonreeves, Bosmeri Treethanes and Khajiit Chieftains. The Thalmor was devised by Ayrenn as a means of creating equal representation for the Aldmeri Dominion's three races. Ayrenn inherited the throne when the previous Altmer ruler, her father King Hidellith, passed away. She was, no doubt, one of the youngest leaders in the history of Mer. She was a mere 25 years old when she became Queen (7th of Frostfall, 2E 580). Despite her youth, Queen Ayrenn was said to have virtues rare among her kind. She was an honorable, intelligent, and stubborn leader. Before she took the role of a queen, she was said to have been an adventurer and had set foot in every province of Tamriel.[UL 1] The King Aeradan is the political leader of the Bosmer people, he along with The Silvenar and The Green Lady assist Queen Ayrenn in ruling Valenwood for the Dominion. Likewise the Mane is the ruler of Elsweyr and rules it in the name of the Dominion.

The High Elves, or Altmer, arrived in Tamriel thousands of years ago from Old Aldmeris. They see themselves as the ruling race of Tamriel. They are a highly cultured people, known for their breathtaking architecture and massive libraries of histories and creative works. They tend to be isolationists, largely remaining on Summerset Isle, and only emerging when they perceive a great threat to their homeland. They are powerful mages and warriors, and the de facto leaders of the Aldmeri Dominion.[UL 1]

The Aldmeri Dominion has adopted as its symbol the eagle sigil of the High Elves of Summerset. For the Altmer, the high-soaring eagle represents their ancestors the Aedra, who came from the heavens and were trapped in physical form by the creation of Nirn.[UL 2]

The Wood Elves, or Bosmer, are mischievous, curious and nimble. Because their homeland of Valenwood is often attacked by the Colovian Imperials, Wood Elves are experts at the art of defense. They are also gifted archers, perhaps the best in all of Tamriel.[UL 1]

The population of the proud feline Khajiit has dwindled in recent years following a devastating outbreak of Knahaten Flu. They owe a great debt to Ayrenn, Queen of the High Elves, for her help in restoring order from the chaos that followed the plague. They have a wry wit and a hedonistic outlook, but they are fearsome on the field of battle. They are the strong arm of the Aldmeri Dominion.[UL 1]

The questline of the Aldmeri Dominion is experienced in the zone story quests of each zone within Aldmeri Dominion territory. In chonological order, the zones of the Dominion storyline are Khenarthi's Roost, Auridon, Grahtwood, Greenshade, Malabal Tor and Reaper's March. 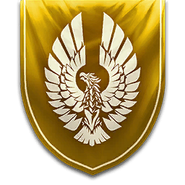 Notice: The following are unlicensed references. They are not copyrighted by a ZeniMax Media company, but can still be considered part of The Elder Scrolls lore and are included for completeness.
Čeština Deutsch Español Français Italiano 日本語 Polski Русский Українська
*Disclosure: Some of the links above are affiliate links, meaning, at no additional cost to you, Fandom will earn a commission if you click through and make a purchase. Community content is available under CC-BY-SA unless otherwise noted.
Advertisement