Not to be confused with Alduin (Online).

), sometimes referred to as the World Eater,[1] the Twilight God,[2] and the First Dragon,[3] is a mighty dragon who ruled over Skyrim during the Merethic Era. Worshipped as a god-king by the ancient Nords through the Dragon Cult, Alduin is considered the wellspring of the Nordic pantheon, as well as the harbinger of the apocalypse, and the Nordic god of time, and is believed to have a pivotal role in the reshaping of the world.[1]

"And the Scrolls have foretold of black wings in the cold, That when brothers wage war come unfurled! Alduin, Bane of Kings, ancient shadow unbound, With a hunger to swallow the world!" – Song of the Dragonborn

During the early Merethic Era, the ancient Atmoran people worshiped numerous animal totems which would become the Nordic pantheon—the hawk, wolf, snake, moth, owl, whale, bear, fox and the dragon—as the avatars of the gods.[2][4][UL 1] The Dragon was considered the most important out of all the animals.[4] Therefore, at the dragons' approval, the people of Atmora and later Skyrim came to deify the dragons, worshipping them as god-kings, through this establishing the Dragon Cult as the dominant belief system of ancient Nordic culture.[4]

Alduin's chief lieutenant during this period was Paarthurnax,[6] his younger sibling, who was said to have committed unspeakable atrocities against mankind.[7] However, Paarthurnax and a few other dragons turned against Alduin,[5][4] possibly at the behest of the goddess Kyne, and taught humans how to use the Thu'um; granting the most courageous among them the chance to rebel against their dragon overlords.[8] The ensuing conflict between the dragons and the ancient Tongues became the legendary Dragon War.[4][8][9] At its height, Alduin was led to the Throat of the World where he battled three Nordic heroes, Felldir the Old, Hakon One-Eye and Gormlaith Golden-Hilt, the first Tongues and leaders of the rebellion against Alduin. They created a unique Shout known as Dragonrend through which they managed to cripple Alduin, and then used an Elder Scroll to send him forward in time.[9][5]

By 2E 582, worship of Alduin was already outlawed for centuries,[10][11] Alduin had no admitted worshippers,[10] and the Nords of Skyrim were apparently fearful of worshipping Alduin.[3] However, some Nords did pray to him, hoping that their prayers will keep him at bay.[2]

"But a day, shall arise, when the dark dragon's lies, Will be silenced forever and then! Fair Skyrim will be free from foul Alduin's maw! Dragonborn be the savior of men!"
―Song of the Dragonborn[src]

A prophecy foretelling of Alduin's inevitable return to Nirn is inscribed unto Alduin's Wall, located at Sky Haven Temple, which is a wonder of the ancient world built in the First Era by the Akaviri; and the existence of which is recounted in the Book of the Dragonborn and possibly on an Elder Scroll.[12][13] It warns that the World Eater will eventually return after various tumultuous events have occurred in world history, retelling the events that have led up to this point, and claiming that the Last Dragonborn will come forth at that time to stand against Alduin.

As foretold by the Prophecy, Alduin would resurface in 4E 201 amidst the Skyrim Civil War. After making his presence known with an attack on Helgen, he began visiting the dragon burial sites across Skyrim to resurrect his subordinate dragons and reestablish his dominance over Skyrim. The resurgence of the dragons and their ancient reign of terror became known as the Dragon Crisis. It was during this time that the Last Dragonborn emerged to challenge the World Eater. Only the Dragonborn was able to hinder the dragons' onslaught and only they could put a permanent end to them by absorbing their souls. With guidance from Paarthurnax, the Dragonborn dealt Alduin a minor defeat at the Throat of the World. The final confrontation came in the Nordic afterlife of Sovngarde, where the three Nordic heroes who defeated Alduin in the past joined the Dragonborn to stop the dragon once and for all, or until the end of time comes, as Esbern and Arngeir speculate.[9][14][15]

Nordic legends assert that Alduin is a god-like entity which destroyed the last world in order to begin the current one, in what is considered the creation of a new Kalpa.[10][5] He bears resemblance to the Yokudan god Satakal,[16][1] the Argonian god Atakota,[17] the Khajiiti god Alkhan,[18] and the Skaal know him as Thartaag the World-Devourer,[19] though scholars speculate the All-Maker is the Skaal interpretation of Alduin.[20] As a result, Alduin has been seen both as creator and destroyer by various cultures, with his existence predating the creation of Nirn itself.[10] There are legends of his battles with the god Shor at the beginning of time.[21] Much like Nordic legends, Khajiiti songs assert Alkhan was slain by Lorkhaj and his companions, and that he will return in time, as he is immortal.[18] Alduin also conspired with Orkey to reduce all the Nords to children, until he was again defeated by Shor by request of King Wulfharth.[21] Alduin is also known in old tales for his ability to devour the souls of the dead, and by doing so he can increase his power.[9][14][22] Alduin is considered the wellspring of the Nordic pantheon, a depiction that bears resemblance to those of Satakal and Atakota in their respective pantheons, in which they are represented as the force that enabled the et'Ada to form.[1][16][17]

Imperial scholars speculate that Alduin is the name by which the ancient Nords knew Akatosh, the dragon god of time and later patron deity of the Empire.[1][22] However, some Nords consider this a mischaracterization, maintaining that Alduin and Akatosh are indeed regarded as separate beings in Nordic legend.[23] Alduin called himself the "Firstborn of Akatosh."[24] According to Paarthurnax, Alduin's dragon peers considered him Akatosh's most acclaimed "creation."[5] According to the Khajiiti pantheon, Alduin is the firstborn of Akha, who is the father of all dragons and predecessor of Alkosh according to the pantheon, suggesting that Alduin predates Akatosh, or Alkosh according to the Khajiiti pantheon.[18] According to the Yokudan pantheon and Argonian pantheon Alduin formed from the conflict of Anu and Padomay, and is in essence the Aurbis.[1][16][17] Some sources suggest he was split from Akatosh, or possibly the greater Aka-Tusk, and that Alduin embodies a particular aspect of the time god.[UL 2]

The World Eater and his brothers return. 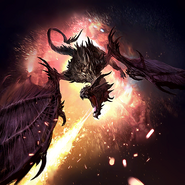 Art of Alduin from The Elder Scrolls: Legends.

Alduin at the Throat of the World.

Notice: The following are unlicensed references. They are not copyrighted by a ZeniMax Media company, but can still be considered part of The Elder Scrolls lore and are included for completeness.
Deutsch Español Bahasa Indonesia Polski Português Русский
*Disclosure: Some of the links above are affiliate links, meaning, at no additional cost to you, Fandom will earn a commission if you click through and make a purchase. Community content is available under CC-BY-SA unless otherwise noted.
Advertisement