50% to all damage sources

Not to be confused with Alvuin or Aldunie.
For other uses, see Alduin.

), the World Eater,[1] also considered an alternative name of Akatosh by some of Tamriel,[2] is a dragon and the primary antagonist of The Elder Scrolls V: Skyrim's Main Quest. He is considered the "wellspring" of the Nordic pantheon, as well as the harbinger of the apocalypse.[1] He is also described as the "creator of dragon civilization" in one particular text.[3]

"You do not even know our tongue, do you? Such arrogance, to dare take for yourself the name of Dovah!"
―Alduin to the Last Dragonborn[src]

During the executions, Alduin will be flying above Helgen, and his roars can be faintly heard. Once the Last Dragonborn is placed on the chopping block, he will land on top of the tower above and use the roar that summons a storm raining meteors down from the sky to cause havoc and destruction in the settlement. During the Dragonborn's escape from the village and into Helgen Keep, he will be seen fighting a number of Imperial soldiers, and may land and attack the Dragonborn in front of the keep if the Dragonborn does not escape quickly enough. Once the keep is escaped through the cave, he will be seen flying above, and will fly away to the east.

A Blade in the Dark

The Last Dragonborn and Delphine both travel to Kynesgrove during this quest. Here is where Delphine has predicted that the next Dragon will be resurrected. It turns out Delphine is right and here, on a dragon burial mound, Alduin can be seen flying above. A blue light is rising out of the mound. Alduin will use a shout to resurrect this dragon. He speaks the words "Slen Tiid Vo!" and a shout that looks similar to Unrelenting Force will go into the mound, causing the stone lid to crumble and burst apart. A skeletal dragon will then rise from the mound and start speaking to Alduin. After a small conversation between the two dragons, the skeletal dragon will regain his scales. This dragon is known as Sahloknir. They will then notice the Dragonborn, at which point Alduin taunts the Dragonborn on their lack of knowledge of the Thu'um, before ordering Sahloknir to kill both the Dragonborn and Delphine before taking his leave.

In the vision of the past seen through the Time Wound, three heroes known as Felldir the Old, Gormlaith Golden-Hilt, and Hakon One-Eye are seen fighting off the dragons. Gormlaith will kill a dragon whom lands by jumping on to it and then stabbing it in the head. Afterwards the heroes will discuss the possible use of an Elder Scroll to defeat Alduin, but Hakon says it is to dangerous. Alduin will come down to fight them and then the three heroes will use Dragonrend to bring down Alduin. Alduin will then engage in combat with the three heroes. Gormlaith will be killed by Alduin and then Hakon will tell Felldir to use the Elder Scroll. Alduin will continue to fight Hakon for a short time before noticing what Felldir is doing. Alduin will turn to Felldir and try burning him with Fire Breath, but this does not work and Alduin is sent forward in time.

Upon awakening from the vision, Paarthurnax will say that he hopes the vision told the Dragonborn what he needed to know because Alduin has arrived. Alduin taunts the Dragonborn that their time is up and once he kills them, their soul will feed his hunger in Sovngarde, only for Paarthurnax to retort that he is too late. The two brothers exchange words as they engage in battle in the skies. Alduin will start the battle by roaring and summoning a storm that rains meteors down from the sky. The only way to damage Alduin is to use the Dragonrend shout. Upon Alduin's defeat, Alduin will fly away to Sovngarde.

Upon entering Sovngarde, Alduin can be seen flying around in the back. He will occasionally swoop down to pick up a soul in Sovngarde. The Dragonborn must travel through the mist that Alduin has set up until they reach the Hall of Shor. Here the three heroes will again come out to fight Alduin, although this time they have the Dragonborn to help them win.

Before the battle can begin, the Dragonborn and the three heroes must disperse the mist that covers the land. They use Clear Skies to get rid of the mist, but Alduin will make the mist reappear. This process must be repeated a few times before finally Alduin will come out and battle. After killing Alduin, the Dragonborn will not absorb his soul. Instead, Alduin explodes after yelling words in the dragon language that, when translated, indicate his defiant refusal to believe he can truly be slain.

Scholars speculate that Alduin is the Nordic name attributed to Akatosh.[1][2] One source states that Alduin and Akatosh are different deities entirely.[4] Alduin calls himself the "Firstborn of Akatosh."[5] Exactly what the "Firstborn of Akatosh" means is unclear, although some sources suggest he was split from the time god at some point in the past.[UL 1] According to Paarthurnax, Alduin's peers considered him the most acclaimed creation of Akatosh.[6] According to some sources, Alduin is the firstborn of a deity named Akha, a greater time god than Alduin or Akatosh, from whom both time gods originate alongside the dragons.[7]

Nordic myth asserts that Alduin destroyed the last world to begin this one, a process known as a Kalpa. As a result, Alduin is perceived as both creator and destroyer,[1] as well as predating the creation of Nirn itself. There are legends of his battles with Shor during this time.[8]

During the Merethic Era, the people of Atmora and Skyrim worshiped dragons, possibly at the urging of Alduin.[4] He also conspired with Orkey to reduce all the Nords to children, until he was again defeated by Shor.[8] Some consider that Alduin's rule during this period was foresaking his proper role as the World-Eater.[6] Alduin served as a leader of the dragons, and he ruled with an iron fist. The humans either worshiped him or were enslaved.[9] The humans worshiped him and the dragons in the Dragon Cult. High ranking members of this cult would be known as a Dragon Priest. Alduin's lieutenant at the time was Paarthurnax, but secretly Paarthurnax was betraying him. Paarthurnax was teaching the voice to the humans so that they could rebel against their dragon overlords. The ensuing war would be known as the Dragon War.

He was ultimately sent forward in time through the actions of three Nordic heroes, who created a new Shout to subdue him, and used an Elder Scroll to send Alduin forward in time.[10]

"And the Scrolls have foretold, of black wings in the cold, That when brothers wage war come unfurled! Alduin, Bane of Kings, ancient shadow unbound, With a hunger to swallow the world!"
―Song of the Dragonborn[src]

A prophecy foretelling Alduin's return is on Alduin's Wall, located at Sky Haven Temple, built in the First Era and recounted in the Book of the Dragonborn, and possibly on Elder Scroll.[11][12] It tells that the World-Eater will return after various tumultuous events have occurred, retelling events have led up to this point, and claiming that the Last Dragonborn will come forth at that time.

Concept art of Alduin attacking with a shout. 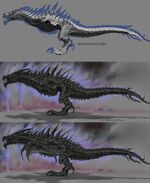 Concept art of Alduin's body compared to that of a regular Dragon.

Alduin's head concept art.
Add a photo to this gallery

Alduin against a wall.

Alduin on top of a fort in Helgen. 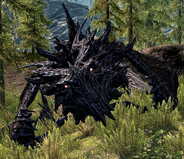 Close up view of Alduin.

Alduin at Sovngarde.
Add a photo to this gallery

Notice: The following are unlicensed references. They are not copyrighted by a ZeniMax Media company, but can still be considered part of The Elder Scrolls lore and are included for completeness.
Retrieved from "https://elderscrolls.fandom.com/wiki/Alduin_(Skyrim)?oldid=3140729"
*Disclosure: Some of the links above are affiliate links, meaning, at no additional cost to you, Fandom will earn a commission if you click through and make a purchase. Community content is available under CC-BY-SA unless otherwise noted.