"Appearances are everything! They feed opinion and belief, and such matters are important to me."
―Almalexia[src]

Almalexia is a Chimer goddess and a member of the Tribunal. She is a prominent member of the Ebonheart Pact and has some degree of influence in the decisions it makes.

She primarily appears in Deshaan, which features Mournhold, capital of the Ebonheart Pact. She was once the mortal wife of Indoril Nerevar, until their marriage ended after his death at the Battle of Red Mountain. With Vivec and Sotha Sil, Almalexia used Keening, Sunder and Wraithguard on the Heart of Lorkhan to become gods.

Since then, the Tribunal as they were now called became the living gods of the Dunmer people, using their godlike powers to aid them in times of chaos and strife. Her public image is that of a kind and nurturing mother who offers council to the Dunmer people, and leads them along with her fellow Tribunal in times of war, often seen as the more popular of the three.

After reporting to Almalexia, she will thank the Vestige for their service, rewarding them with her lantern and bestowing higher authority upon them.

Once a number of Maulborn are defeated, Almalexia will appear and cast a powerful spell.

The Seal of Three[edit | edit source]

An Ordinator will inform the Vestige that Almalexia wishes to see them at the temple. Upon speaking to her, she will inform them that the Maulborn have infiltrated the temple and summoned a number of Daedra. After praying to her altar and defeating the Daedra, she says the Vestige must receive Vivec and Sotha Sil's blessings by completing their trials in order to restore the wards of the temple. Once this is done, she names them a Hand of Almalexia.

Into the Mouth of Madness[edit | edit source]

At Eidolon's Hollow, Ordinator Muron will ask for the Vestige to use the camp fire. Once activated, a vision of Almalexia appears, tasking the Vestige with destroying the three wards in the hollow.

Using the Anima Crystal, the second memory displays Meram Vox's trial after he tried to steal the Veloth's Judgement and killed many of the Tribunal faithful. Almalexia questions Meram, but after he renounces her as a false god, she kills him for his treachery. Urili Vox, whom would later be known as Magistrix Vox, was witnessing the trial and begged Almalexia for mercy.

The Judgement of Veloth[edit | edit source]

Once Vox is killed, the souls will be set free and Almalexia will appear. She will tell the Vestige Veloth's Judgement has returned to the temple, the souls in the hammer have been freed, and that the chaos in Deshaan has been resolved. She will thank the Vestige for their service and open a portal back to Mournhold. 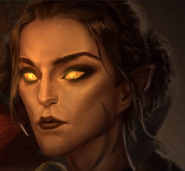 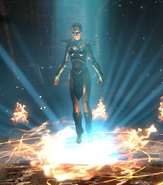 Servant of Almalexia
Add a photo to this gallery

Retrieved from "https://elderscrolls.fandom.com/wiki/Almalexia_(Online)?oldid=3097401"
*Disclosure: Some of the links above are affiliate links, meaning, at no additional cost to you, Fandom will earn a commission if you click through and make a purchase. Community content is available under CC-BY-SA unless otherwise noted.