Not to be confused with Francois Motierre.

"Don't you have all the information you need? Please, the Emperor isn't going to kill himself. Hmph. Now wouldn't that be a blessing..."
―Amaund Motierre[src]


Amaund Motierre is a Breton appearing in The Elder Scrolls V: Skyrim. He plays a role in the final quests of the Dark Brotherhood questline, seeking the assassination of the current Emperor, Titus Mede II.

Amaund appears calm and confident when the Dragonborn first approaches him in the Dark Brotherhood quest "The Silence Has Been Broken." As the questline progresses, he becomes more and more stressed.

Motierre hides at Volunruud with his bodyguard Rexus. After the quest "Death Incarnate," he goes to The Bannered Mare in Whiterun.

Whispers in the Dark[]

The Night Mother mentions a man named Amaund Motierre, who hides out at Volunruud, performing the Black Sacrament. She asks her new Listener to seek out Motierre. Threatened by the Night Mother's authority, Astrid asks the Dragonborn not to speak with Motierre, sending them on another contract instead.

It is possible for the Dragonborn to speak with Motierre before Astrid gives the next objective. If the player travels to Volunruud right after the Night Mother is first spoken to, rather than have Astrid tell the Dragonborn to get quests from Nazir, Motierre will be waiting for the player as if the next quest has begun. Rexus will give the sealed letter as well as the valuable amulet, and the Dragonborn can choose to keep it or give it to Astrid to continue with the quest.

The Silence Has Been Broken[]

If the Dragonborn chose to do the side contracts rather than listen to the Night Mother, then eventually, Astrid changes her mind and sends the Dragonborn to meet Motierre, who states that he wants the Emperor killed. Rexus will give the Dragonborn the sealed letter and the amulet, the same way that would occur in "Whispers in the Dark" if the Dragonborn went to Motierre first. The Dragonborn reports back to Astrid, who takes the letter and instructs them to speak to Delvin Mallory to appraise the amulet.

After a failed assassination attempt on Titus Mede II and the near destruction of the Dark Brotherhood, the Dragonborn follows the Night Mother's instructions to find Amaund Motierre, who has relocated to the The Bannered Mare, and discover the location of the Emperor to complete the contract. Motierre sends the Dragonborn to The Katariah, the Emperor's personal ship, still anchored in Solitude Harbor. He will also mention that Commander Maro is located at the East Empire Company Warehouse.

The Dragonborn kills the Emperor, whose final wish is to have whoever set up the contract killed. After returning to Motierre, he will instruct the Dragonborn to return to Volunruud to pick up their reward: 20,000

After collecting the reward, the Dragonborn has the option to kill Motierre. Doing so gives the advantage of collecting a few rare gems from his corpse, as well as possibly receiving an inheritance from him. 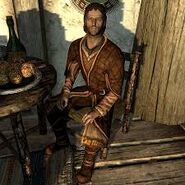