For other uses, see Amiel.

"Bah! Overestimated the dungeons of our enemies, more likely! Never trust another man's deathtraps. Double the guard, immediately, and increase the patrols in town and along the waterfront. The Redguard must not find his sister."
―Amiel Richton[src]

Admiral Lord Amiel Richton (2E 816[1]–2E 864) was an Imperial who was made the Provisional Governor of Stros M'kai by Tiber Septim after winning the Battle of Hunding Bay. He later died in the year 2E 864 at the hands of the Redguard rebel, Cyrus.

Amiel Richton was born on 2E 816 near the Strid River in Colovia. He grew up raised by a minor noble family.[1]

Amiel, like Tiber Septim, also began his service under Cuhlecain, the last emperor of the Interregnum. His family also supported Cuhlecain, and Richton himself was very loyal. After being overthrown, Amiel became in service of Tiber Septim.[1]

Tiber Septim employed Richton to be become the commander of the New West Navy, a navy responsible for battles west of Tamriel in the Abecean Sea. He led a campaign against the pirates of the Abecean, and commanded a squadron at the Battle of Bjoulsae that put Wayrest under control of the Empire. After Vasi Hadrach was assassinated by a Reachman in Daggerfall, Richton succeeded him and became the new Admiral.[1]

Richton's crowning moment came during the Battle of Hunding Bay. Richton employed the Dunmer assassin Dram to shoot Prince A'Tor during the battle. After destroying many fleets, Richton finished off Prince A'Tor remaining forces and the Crowns by calling on the dragon Nafaalilargus to kill any remaining members as well as destroy the old quarter of Port Hunding.[1][2]

After the battle Richton became the Provisional Governor of Stros M'kai, which became one of the biggest supply ports for the navy. His job was clear the island and waters around of any Abacean pirates or Crowns and guard the Cape of the Blue Divide.[1][2] Richton moved into Prince A'Tor's former palace and made it the base of operations of the Septim Empire on the island. Richton's rule was found to have been dictatorial and oppressive by the inhabitants of Stros M'kai.[3]

Richton hired Cyrus to deliver N'Gasta's amulet to him. When Cyrus arrived and gave him the amulet, he asked for information on his sister. Richton lied claiming he knew nothing, causing Cyrus to threaten him. Cyrus killed three of his guards before being thrown in the catacombs by Dram. Cyrus had then later escaped.[3]

Richton then employed Dram to hunt down Cyrus, though all attempts proved to be a failure. Cyrus plotted against Richton with the Restless League to overthrow Richton. Cyrus then killed Nafaalilargus who was guarding A'Tor's soul gem and used it to create the Soul Sword.[3]

Cyrus then invaded the palace. He used the Soul Sword to guide him and managed to kill many of the guards. Cyrus then reached Richton on the Dwemer Airship stationed on the palace courtyard. As the Airship began to fly, he dueled in sword combat and Richton was defeated, but managed to use his last moments to distract Cyrus. Cyrus was forced to surrender by Dram who held a dagger to his throat and dropped his sword. The sword then flew up and killed Richton by stabbing him in the chest, and later sliced Dram in two halves. Cyrus then jumped down from the airship and cut open the fabric, causing it to crash.[3]

Cyrus and the Restless League remained victorious and freed Stros M'kai from Richton's rule, after which the Treaty of Stros M'kai was signed.[3]

Upon retrieving the amulet and returning it to the palace, a cutscene will commence. Cyrus will threaten Richton for not giving any information on his sister and is thrown in the catacombs.

After Cyrus escapes a cutscene will show Richton telling Dram to hunt down the rebel.

Attack on the Palace[edit | edit source]

Cyrus will defeat the guards and eventually dual Richton, resulting in his death. 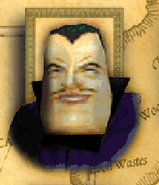 Richton's death at the hands of Cyrus and the Soul Sword.

Richton walks into the palace to retrieve the amulet from Cyrus.

Richton distracts Cyrus while Dram catches him off guard.

Richton and Dram concept art.
Add a photo to this gallery

Retrieved from "https://elderscrolls.fandom.com/wiki/Amiel_Richton?oldid=3076271"
*Disclosure: Some of the links above are affiliate links, meaning, at no additional cost to you, Fandom will earn a commission if you click through and make a purchase. Community content is available under CC-BY-SA unless otherwise noted.