The Amulet of Kings is a legendary red amulet in The Elder Scrolls IV: Oblivion. It is worn by Emperor Uriel Septim VII, though after his assassination it must be delivered to Jauffre. It is one of the most important quest items in the game, and due to its nature, cannot be worn by the Hero of Kvatch.

Before being assassinated, Uriel Septim VII gives the amulet to the Hero to be delivered to Jauffre as part of his dying wishes.

When the amulet is given to Jauffre at Weynon Priory, he will store it in a secret compartment. Once the Hero returns with Martin Septim, Uriel's last heir, the amulet is revealed to have been stolen by the Mythic Dawn.

Enter Paradise and retrieve the amulet from Mankar Camoran.

Martin will sacrifice the amulet and himself in order to defeat Mehrunes Dagon. The power of the amulet will transform him into an avatar of Akatosh. 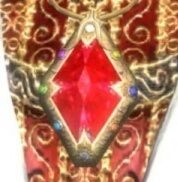 Close-up of the Amulet

Uriel Septim wearing the Amulet
Add a photo to this gallery

Retrieved from "https://elderscrolls.fandom.com/wiki/Amulet_of_Kings_(Oblivion)?oldid=2965697"
*Disclosure: Some of the links above are affiliate links, meaning, at no additional cost to you, Fandom will earn a commission if you click through and make a purchase. Community content is available under CC-BY-SA unless otherwise noted.