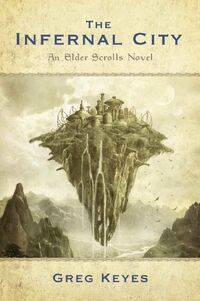 The Infernal City is a novel set in The Elder Scrolls universe, that was published by Del Rey on November 24, 2009, and by Titan Books in the UK. It is written by Gregory Keyes, and a sequel titled An Elder Scrolls Novel: Lord of Souls has been written.

The events of the novel revolved around the story of Annaïg Hoïnart, a young Breton; Mere-Glim, her Argonian friend; Prince Attrebus, only son of the emperor Titus Mede; Colin, a Penitus Oculatus agent; and Ezhmaar Sul, a vengeful Dunmer and how their destinies tie into that of the dangerous and looming Umbriel, a floating city.

The story begins with Umbriel being summoned into the mortal plane.[1] The flying city approaches the city of Lilmoth by sea. The An-Xileel escape from the destruction of the city, but the Lukiul, the assimilated Argonians, are controlled by the rogue Hist of Lilmoth. The Lukiul and non-Argonian races are slaughtered and reanimated as zombies. Annaïg and Glim escape the massacre, and they end up in Umbriel thanks to a flying potion.[2]

Annaïg and Glim must then work in Umbriel to survive. Annaïg son becomes a renowned cook, and the different kitchens of Umbriel fight to have her in their kitchen. Mere-Glim, is sent to the sump, where he must take care of gathering the resources the sump provides and taking care of the Umbrielians that are being born.[3]

Annaïg warns Prince Attrebus about Umbriel through a Dwemer device that allows them to talk through a screen. Attrebus is a hero to the people, so he proposes his father Titus Mede I to launch an attack on Umbriel. The emperor isn't bothered by the flying city, and refuses to send an expedition unless Umbriel threatens the Empire.[4]

Attrebus disobeys his father orders, and he leads his men into the flying city. Attrebus is betrayed by one of his men, Radhasa, who turns out to be a criminal. They are ambushed and all of Attrebus' men are slaughtered. Attrebus is held captive and transported to Elsweyr to be sold to an eccentric Khajiit who collects people like him. Radhasa reveals to Attrebus that his life is a lie, he was risen to believe he was a hero, but in fact, he was only allowed to take part in battles where he heavily outnumbered the enemy. Sul saves Attrebus from Radhasa, and they team up to stop Umbriel.[5]

Inspector Colin, a newly appointed Penitus Oculatus, is put in charge of Attrebus' case. Everything points that he has been murdered. A beheaded body is found with the prince's signet. However, Colin believes that the prince is alive. He is interviewed by the Emperor. Colin exposes his concern to Titus Mede, who believes that his son is alive.[6]

Sul tells Attrebus all he knows about Umbriel. Forty-eight years ago, Sul's wife Ilzheven was chosen to power the Ingenium, a device that kept the Ministry of Truth afloat. Sul tried to save her, but he destroyed the Ingenium. Baar Dau collided with Vivec City killing Ilzheven and triggering the events of the Red Year. Sul and Vuhon, the designer of the Ingenium, where propelled into Clavicus Vile's realm, where Umbra took them captive. Sul managed to escape from Vile's realm, but Vuhon had to make a pact with Umbra. Vuhon built a second ingenium that could power Umbriel, Umbra's city. They merged into one body, henceforth called Lord Umbriel. The only way to stop Lord Umbriel is by wielding Umbra sword against him. Umbra, the being, had thrown Umbra into Vivec City when Vuhon and Sul arrived at Vile's realm, so Attrebus and Sul head to the city.[7]

Word spreads that Annaïg is a talented cook. The kitchen she is working at is invaded by Chef Toel, one of the top chefs of Umbriel. Annaïg is taken to Toel's kitchen, where she further ascends as a cook. Mere-Glim, for his part, initiates a secret rebellion with the skraws to improve their living conditions.

Attrebus and Sul are aided by the F'aashe clan. They open a gate to Oblivion so that they can beat Umbriel to Vivec City. They end up in Hircine's Hunting Grounds. Hircine chases them, but the warriors of the F’aashe clan sacrifice so that Attrebus and Sul can escape. At last, they arrive at Vivec City. Sul searches for Umbra, but the sword had already been taken by another person. He encounters Ilzheven's ghost, who begs him to let it go and don't suffer any more.

Colin discovers that a woman called Letine Arese is involved in Attrebus' ambush. He follows her to a meeting with the criminals that organized the ambush. Letine summons a daedra and kills the criminals. The daedra almost detects Colin, but he remains hidden in the shadows.

Umbriel arrives at Vivec City, and the undead capture Attrebus and Sul. They are brought to Umbriel, where they finally encounter Vuhon. Sul manages to break free from his chains and attacks Vuhon, but every effort is useless. Without Umbra, they can't defeat Vuhon. Sul opens a portal to Oblivion and Attrebus and him escape from Umbriel.[8]

Annaïg replicates the flying potion that allowed Glim and her to arrive at the flying city. She informs Glim that they can escape from Umbriel. They meet at midnight at the docks. They drink the flying potion, but while they fly away from Umbriel, their bodies start to become incorporeal. They had spent too much time in Umbriel, so they had become part of it. They were affected by Vile's circumscription, so they couldn't leave Umbriel. They came back to the flying city, hoping that they would be able to escape in the future.[9]

For a list of characters, see Characters (Infernal City).

The Infernal City received an average rating of 4.2 / 5 stars on Amazon.

Беларуская Deutsch Español 日本語 Polski Русский
*Disclosure: Some of the links above are affiliate links, meaning, at no additional cost to you, Fandom will earn a commission if you click through and make a purchase. Community content is available under CC-BY-SA unless otherwise noted.
Advertisement