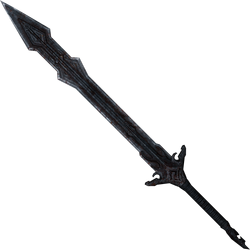 Ancient Nord Weapons are weapons that date back to the Merethic and First Eras.

The were typically buried with their owners in Nordic Tombs throughout Skyrim.

Ancient Nord Weapons cannot be created, but can be upgraded with a Steel Ingot.

Ancient Nord Weapons can also be forged into Nord Hero Weapons at the Skyforge after completing The Companions' questline and asking Eorlund Gray-Mane about the Skyforge.

Retrieved from "https://elderscrolls.fandom.com/wiki/Ancient_Nord_Weapons?oldid=3074622"
*Disclosure: Some of the links above are affiliate links, meaning, at no additional cost to you, Fandom will earn a commission if you click through and make a purchase. Community content is available under CC-BY-SA unless otherwise noted.