"Dwarven military machines also range from the human-sized "Sphere" warrior, which patrols the interiors of the ruins as a harmless ball only to emerge from it as a fully armed and armored automaton fighter, to the justly feared "Centurion" whose height ranges from twice to several hundred times human size depending on which reports you believe."
―Calcelmo[src]

Animunculi (singular Animunculus) are ancient mechanical automatons that may be found patrolling the many abandoned Dwemer Ruins encountered throughout Tamriel.[1]

Although many scholars studied them, such as Edwinna Elbert, Septimus Signus or Calcelmo,[1] very little is known about the Animunculi. These animated mechanical creatures were created long ago by the Dwemer to serve as guardians in their underground cities and temples, which dot the landscape of Morrowind, Skyrim and Solstheim.[2]

Long after the Dwemer mysteriously vanished, these Animunculi still patrol the Dwemer ruins and citadels, attacking anyone who ventures therein.[3] 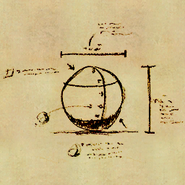 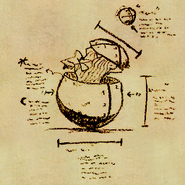 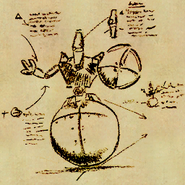 The design of the Animunculi themselves seem to be a combination of steam-powered clockworks and magic, they may be powered by their mysterious Dynamo Cores or soul gems.[4] Their artificial construction makes them extremely resilient to both physical and magical attacks, and grants them immunity to poison and frost (despite this, the Ebony Mail will still affect them), although they are still somewhat susceptible to fire damage.[1] Animunculi seem to be the fruit of a culture that would have been technologically extremely advanced compared to the rest of Tamriel's civilizations, they are nonetheless mechanical and the actual secret to their inner workings remains unknown.[5]

They appear to have several group-types, likely linked to their duties,[5] such as the Dwarven Spiders, the smallest of them all; the Dwarven Spheres, that are the size of a humanoid and the Dwarven Centurions, which are as large as common Giants. Their aesthetic designs differ from province to province.[1]

When defeated, many animunculi are found to contain soul gems of various sizes, Dwarven oil, and various artifacts which may be sold or smelted into ingots, or simply used as decorations.

The Numidium was a colossal golem built by the Dwemer during the First Era. It was created to serve as a god.[6][7] It was first used in battle during the Battle of Red Mountain, against the Chimer armies. It was later gifted to Tiber Septim.[8][9]

Much later, Dagoth Ur endeavored to recreate a similar giant golem, known as Akulakhan, to conquer Tamriel,[10] It was destroyed during the Third Era by the Nerevarine.[11]

"The last, but probably most important discussion in this volume, pertains to the existence of dwarven machinery. Dwarves created and manufactured on a very broad scale thousands of mechanical apparatuses of varying complexity. The most simple of which is the standard "arachnid" design used to ward off trespassers. We are so far uncertain as to how the dwarves were able to bring to life these remarkably intelligent machines."
―Calcelmo[src]

The following books contain observations on the Dwemer automatons: 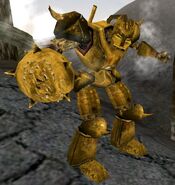 A Steam Centurion as seen in Morrowind 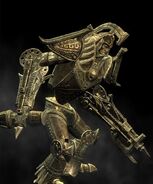 A Dwemer Centurion as seen in Skyrim

A Dwarven Centurion as seen in Online

A Centurion Spider as seen in Morrowind 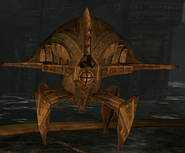 A Dwarven Ballista as seen in Dragonborn

Concept art for the Dwarven Spider as seen in Online

Español Русский Українська
*Disclosure: Some of the links above are affiliate links, meaning, at no additional cost to you, Fandom will earn a commission if you click through and make a purchase. Community content is available under CC-BY-SA unless otherwise noted.
Advertisement