Mage
Draugr
Ansilvund is an ancient Nordic tomb in The Elder Scrolls V: Skyrim. It is an excavation site into the tomb of Fjori and Holgeir and is located northeast of Shor's Stone and east of Cragslane Cavern in the Rift. Outside the entrance is a ruined stone tower. The entrance is a cave in the mountainside. Ansilvund is a large tomb filled with multiple traps.

It is learned that Lu'ah Al-Skaven is overwhelmed with anger and hatred for both the Stormcloaks and the Empire regarding the loss of her husband, Saeel, in battle during the Great War. Lu'ah and her mage lackeys have been raising draugr to excavate the site in hopes of raising the legendary Fjori and Holgeir to lead her undead army into battle as a means of ultimate retribution, but more importantly, to use Holgeir as a vessel to resurrect her fallen husband. Her thoughts and motives are chronicled in Lu'ah's Journal.

The first level of the site is the excavation level. A number of variously skilled elemental mages and conjurers are encountered here overseeing the tunneling work of their Draugr minions. A conversation can be overheard between three mages around a fire talking about Lu'ah's plans. An arcane enchanter can be found here once the mages are dispatched. Further along, Lu'ah seems to sense the Dragonborn's intrusion and awakens the Draugr throughout the corridor.

The passageway leading into the next chamber can be found on the left hand side under a lantern on the wall. The next chamber has a trap in the middle of the room that consists of the floor rising to some spikes in the ceiling. If the Dragonborn is crouching, they will not rise high enough to hit these and take damage.

The final chamber of Ansilvund Excavations is reached through a puzzle room with pillars. The key (Hawk, Snake, Whale, Snake) can be found directly below each one on the ground level, obscured by weeds and other obstructions including behind the table. Alternately, the combination can be gleaned from paying attention to the animal symbolism used in the book Of Fjori and Holgeir, which can be found on the table below the stones. The puzzle/lever opens the passage to the next level of the tomb: Ansilvund Burial Chambers.

Upon entering the Burial Chambers, it becomes clear that this is, in fact, a well constructed Ancient Nord Tomb. The first hallway is rife with a number of devious traps; however, at the end of this hall there is an adept level locked gate at which a pull chain is located that disables the remaining traps. Also in this room is an expert locked chest with a number of leveled loot within. Also in this section is a leveled draugr attacking a moonstone ore vein, however this vein is not accessible to be mined.

The next area is a large three tiered chamber being patrolled by draugr. On the southern wall, the Illusion skill book, 2920, vol 02 - Sun's Dawn, can be found atop a pedestal. Taking it will fire arrows, so move to the side after taking the book. On the western wall, the Ansilvund Key is also located atop a pedestal. This key will open all the otherwise very difficult gates along the upcoming path. Removing the key will also awaken a number of draugr. The path then winds up through each tier of the chamber, which, as seen previously, is riddled with a number of nasty traps, which include fire and a spiked wall.

On the final leg of the journey, more minions are awakened by Lu'ah's calls to stop the intruder. Upon reaching the Burial Chamber proper, Lu'ah is found with her raised minions, Fjori and Holgeir, as well as the lifeless corpse of her beloved. All three combatants are highly skilled and present a difficult fight. Lu'ah is a skilled Ice Mage, and both Fjori and Holgeir are capable of disarming with Dragon Shouts and carry Frost enchanted weapons. Destroying Lu'ah first and quickly will defeat all other foes. One easy way to defeat them is use the ice form shout on Fjori and Holgeir and then focus on Lu'ah. Another method is to use a sneak attack on Lu'ah and then once Lu'ah is defeated, the other two will also be instantly killed. Once defeated, Fjori and Holgeir's spirits are freed from Lu'ah's spell and will thank the Dragonborn by presenting the Ghostblade before returning to the Void. 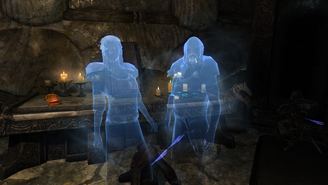 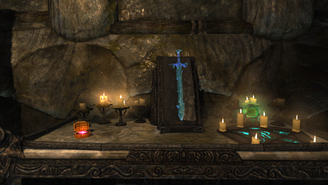 The Ghostblade as it appears on its pedestal (also, note the Stone of Barenziah on the left). 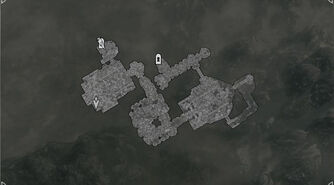 Storm Mage 1: "I think it's sweet that Lu'ah is so worked up over her dead soldier..."
Storm Mage 2: "Yeah, but raising Draugr to fight both the Imperials and the Stormcloaks? That's just crazy."
Storm Mage 1: "True. But I won't be the one to try to oppose her."