"For as long as Anvil has stood upon the Gold Coast, it has been a city of adventure and allure. Legend and mysteries abound, filling its streets and taverns with tales from all around the world."
―Anonymous[src]

Anvil or West Anvil[1] is one of the nine major cities located in the Imperial Province of Cyrodiil. Anvil's ports are teeming with goods and trades from the Summerset Isles to Hammerfell.

Anvil is a walled city located on the Gold Coast shores of the Abecean Sea and sits on the edge between Colovia and the Imperial Province. It is on one end of the Gold Road that leads to the Imperial City and the Red Ring Road. Anvil's main gate is located on its northern wall and that is its only entrance. Anvil's town square is surrounded by the storefronts of craftsmen and guilds. From there, the city continues to the west and east. To the west is the Gold Coast Trading Company building and residential houses. To the east is the Chapel of Dibella, the local bank, and the statue of Selkie of West Skerry.

In 1E 2200, the Thrassian Plague affected Western Tamriel in multiple ways. Bendu Olo of West Anvil accumulated an army known as the All Flags Navy to fight the Sload of Thras. Navies from Colovia, Hammerfell, and High Rock traveled to Thras and sunk the continent into the sea after which only a few islands such as Agonio are left.[3]

In 2E 576, the Gold Coast became a kingdom separate from Cyrodiil when Varen's Wall was finished and the Imperial Navy left the Gold Coast to face Varen Aquilarios' rebellion in the Heartlands. The Red Sails Pirates of the Abecean Sea arrived into the Anvil Bay with a large fleet and took control of Anvil with Fortunata ap Dugal as Provincial Governor of Anvil.[4]

Fortunata ruled Anvil with an iron grip and was considered a ruthless dictator among her people. However, Dugal's reign kept the region controlled and prevented anarchy on multiple occasions. Her Red Sails became a private militia in a manner similar vein to the much later Stormcloaks in Eastern Skyrim.[4]

In 2E 583, the Dark Brotherhood made a resurgence in the Gold Coast and committed several notable assassinations in places such as Anvil and Kvatch. Two of their first assassinations were Lord Quintus Jarol at his Estate north of Anvil and Grand Sermonizer Fithia at-Himah. Groups such as the Order of the Hour began to antagonize the Brotherhood in the hope of destroying them.[5][6]

Oddly enough, Fortunata contracted the Dark Brotherhood to assassinate Commander Marcus Scipio of the Kvatch guard to which the Brotherhood agreed to. The Vestige was sent to Castle Kvatch to complete the contract. After murdering Scipio, the Vestige encountered Count Carolus Aquilarios in his chamber. The Count had contracted the Dark Brotherhood to assassinate Dugal in return and so Speaker Terenus gave the contract to the Vestige and they returned to Anvil. Upon arriving at Anvil Castle, the Vestige was greeted by Dugal, and they both shared a drink on the castle balcony. Dugal's wine was poisoned and she collapsed over the balcony, falling to her death and completing the second contract.[7]

In 3E 433, Anvil prospered along with the other eight cities in Cyrodiil. The city was under the leadership of Countess Millona Umbranox, who was well beloved by her people. Her husband, Corvus Umbranox went missing years ago, yet people believe she was better off without him.[8]

The Oblivion Crisis caused by Mehrunes Dagon occurred in the late third era. An Oblivion Gate opened up outside the main gate of Anvil, and it let out an army of Dremora, Clannfears, and Scamps to attack the city. The Blades of Cloud Ruler Temple, led by Grandmaster Jauffre and the Bruma Guard, led by Burd managed to push the daedric army back into the Deadlands. A greater army later returned, one similar to the one that destroyed Kvatch. The Hero of Kvatch closed the Gate, thus freeing Anvil's forces to join the Hero, Martin Septim, and the combined forces of the eight other cities in Cyrodiil in destroying the Daedric Siege Crawler that was heading for Bruma.[9][10][11]

In 4E 171, the Great War ravaged Cyrodiil and left the Mede Empire in shambles. Lady Arannelya of the Third Aldmeri Dominion traveled from Valenwood through Anvil to get to the Imperial City. In her wake, the cities of Anvil and Kvatch were besieged, leaving the western Imperial front open to attack. The Siege of Anvil was hard on the Imperials as exemplified by a veteran named Noster Eagle-Eye who lost his eye and many comrades at the battle.[12][13] 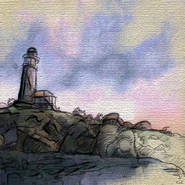 Portrait of the Anvil Lighthouse.

Hero of Anvil in Legends.