For other uses, see Anvil.

"You can best know Anvil by walking its streets and speaking with its people. My favorite time is the harbor at sunset, the sun and the sea to the west"
―Countess Millona Umbranox[src]


Anvil is a port city and the political capital of County Anvil. It is the westernmost city in Cyrodiil, located along the Abecean Sea. The Chapel of Dibella, where followers of the Nine Divines seek her blessing, dominates its skyline. Anvil is home to guildhalls for the Mages Guild as well as the Fighters Guild. In the northeast portion of Anvil lies the statue of the Selkie of West Ferry, who is said to guide sailors along the Gold Coast. Anvil Castle, home of Countess Millona Umbranox, lies on a small island just to the south of the city. Anvil and Skingrad are the only two cities in Cyrodiil in which the castle lies outside of the walls. Another landmark in Anvil is the Benirus Manor, one of the largest houses in Cyrodiil. Anvil has built up a very active trade industry (both legal and otherwise), and much of the town caters directly to sailors. Also, many Nords inhabit Anvil because, according to Sten the Ugly, they are "sick of freezing their asses off in Skyrim."

Anvil is one of the smaller cities in Cyrodiil, with a small residential area and few shops. While the dockside population is usually a varied mix of races, Khajiit and Argonians are rarely seen (with the notable exception of famous author Quill-Weave) within the city proper. The architecture is comprised of large stone buildings with decorative facades and multiple stories; the image is only slightly marred by a few rundown wooden structures. Outside on the docks, the harbor buildings are much less decorative, clearly emphasizing function over form.

The city is ruled by Countess Millona Umbranox, who has been the sole ruler since the mysterious disappearance of her husband, Count Corvus Umbranox, years earlier. The Umbranox family has always ruled Anvil, dating back to Fasil Umbranox and his defeat of an infamous smuggling ring outside of Anvil Harbor. The Countess herself is well-liked, with many residents expressing their belief that leaving her to rule was the best thing her husband could ever do.

The seat of County Anvil is by the sea and has quite a diverse population, including several Elves, but also boasts a large population of Nords and Redguards, two traditionally sea-going peoples. Anvil Castle is clean and well-ordered, and within the town walls, some houses are bright and cheerful, but others are derelict and abandoned, or shabby and neglected, with plaster fallen in patches from the stonework. The city is ruled by Countess Millona Umbranox, whose husband, the Count, went missing some time ago.

Anvil is home to both a Fighters Guild hall and a Mages Guild hall, where guild members can find rest and training. In addition, travelers will find two taverns:

Shopping in Anvil is somewhat limited compared to many other cities. There are only two shops in business at the present time:

The ruler of Anvil is Countess Millona Umbranox. Her husband, Corvus Umbranox, disappeared many years ago, and most of Anvil (and Cyrodiil) think that this was for the best since he was regarded as a loose and frivolous person. The Countess herself does not really share this view and misses her husband dearly, but is an excellent ruler and well-loved by her people. If the Thieves Guild questline is completed, the Grey Fox will resume his previous identity of Corvus and rule alongside his wife. This will be noticed and commented on, but most people are indifferent.

Other points of interest[]

One of the most prominent buildings in Anvil is the large Chapel of Dibella along the eastern road, complemented by two meditation gardens and an arcade. Recently, rumors have begun circulating of attacks on this lovely chapel, and the appearance of a strange preacher in the arcade area, located across the road from the chapel. Near the chapel is Anvil's largest private home, the spacious Benirus Manor, which has been for sale by owner (and apparently not lived in) for quite some time. It is currently inhabited by spirits (can be fixed by doing the quest "Where Spirits Have Lease," from Velwyn Benirus, in the Imperial City). A second abandoned house, significantly less well-kept, is tucked away behind the Fighter's Guild hall.

The Anvil Harbor is one of the major access ports to the Abecean Sea, and frequently hosts sailing vessels. As such, the docks house a number of buildings that support the sea-bound shipping industry. The harbor boats can be rented by the Hero.

Off to the southeast of the harbor, on a large hill jutting out from the harbor, sits Anvil Castle itself. A small cove, The Lady Stone is on the western cliff near the harbor, overlooking the sea.

This is dominated by the large and imposing Chapel of Dibella. A quiet garden for meditation with a fine statue of Dibella lies between the chapel and the town wall, and across from the chapel is a lovely garden and covered arcade where worshippers are protected from the elements. A cobbled road leads to the gate itself.

The most prosperous part of Anvil is entered by Guildgate, or Main Gate, or North Gate. The chapterhouses for the Mages and Fighters Guilds are located side-by-side here, with Morvayn's Peacemakers being located to the right immediately upon entering. The Anvil Mages Guild specialises in Restoration magic (with Trainers in Alchemy, Illusion and Destruction) and is led by Carahil, who is both an excellent leader and outspoken opponent of Necromancy and other black magics. The Anvil Fighters Guild is led by Azzan and offers Basic and Advanced Trainers in Blade, Block, Blunt and Hand-to-Hand.

This is the residential district of Anvil. The houses here are modest two-story semi-detached dwellings and unassuming. One notable resident is the Argonian author Quill-Weave.

The dock buildings are mostly built for function and aren't as picturesque as the rest of the town. The general store, Lelles' Quality Mercandise, is located here with its infamously misspelled sign. Mirabelle Monet runs a boarding house which caters solely to sailors. Two ships are currently moored here, both with interesting and slightly disturbing secrets; The Serpent's Wake and The Sea Tub Clarabella. There is a lighthouse south of the harbor which is operated by Ulfgar Fog-Eye, though the cellar hides a dark secret.

As a shipping town, Anvil's population constantly changes as sailors come and go. At present, the following citizens are usually found living, or working, in and around Anvil:

The city of Anvil is the start of the following quests:

Knights of the Nine[]

Fighters Guild quests in Anvil are given by Azzan: 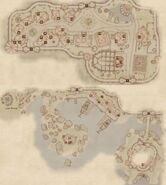 The seal of Anvil

Čeština Deutsch Español Français Nederlands Polski Русский
*Disclosure: Some of the links above are affiliate links, meaning, at no additional cost to you, Fandom will earn a commission if you click through and make a purchase. Community content is available under CC-BY-SA unless otherwise noted.
Advertisement