For other uses, see Anvil.

Anvil is a port city on the coast of the Abecean Sea, in the region of Gold Coast in Cyrodiil. It is the last stop of the Gold Road that connects the city, its neighboring city Kvatch, and finally the Imperial City.

Under the reign of Longhouse Emperor Leovic the city was a well protected, civilized and sophisticated Imperial metropolis. Anvil was the seat of Imperial Prefect and Count of Anvil Ephrem Benirus as well as the home port of the Imperial Navy.[1]

Due to the pleasant climate Anvil was an incredibly popular vacation spot among commoners, nobles and even the Emperor Leovic himself. Thanks to the Gold Road and safety of the Abecean Sea enforced by the Navy, Anvil was a center of commerce offering luxury, spawning many taverns and hostels, and attracting entertainers.[2]

During early stages of Varen's Rebellion the Varen's Wall was built. Varen Aquilarios was popular among the commoners of the region, who helped to build the wall voluntarily. The purpose of the wall was to protect the Gold Coast against the possible retaliation by the Emperor Leovic.[3]

The wall, however, also separated the Gold Coast from the Colovian Highlands and ultimately from the rest of the Empire, diminishing trade and decreasing the stream of travelers. As a result, businesses suffered[4] and many goods that were once common became unavailable.[5]

After Varen Aquilarious led the Second Legion out of the Gold Cost to take his rebellion into the heart of the Empire, Count Ephrem Benirus lead four attacks on the city of Kvatch in hopes to seize Varen's property. These attacks, however, were successfully repelled by Varen's nephew Carolus and the Kvatch Warders. Each attempted attack significantly reduced the number of available forces stationed in Anvil.[6] Once present Imperial Navy was sent away to deal with the rebellions in the north and east.[7] These events combined rendered the city of Anvil nearly defenseless.

"A fortification has stood upon this site, guarding the harbor for all of recorded history. Over time, the military Anvil Fortress was gradually rebuilt into the elegant palace known as Anvil Castle."
―Loading Screen of Anvil Castle[src]

Anvil Castle is a palace located south of the Anvil, near the eastern end of the harbor. It is built on top of a small island and is accessible by a bridge. The palace was once a defensive fortress, but has been since rebuilt as a luxurious palace.[8]

Anvil Castle is split into several halls. The audience hall is open to the public. West, east and central halls are closed and only members of the Red Sails, servants and inhabitants are allowed there. Entering the restricted halls will be considered trespassing, and in case of detection a Red Sails Protector will be summoned. The governor's suite can be found at the end of the central halls, and can be accessed by picking a simple lock. The castle has a large balcony connected to the governor's suite.

At the southern side of the castle an entrance to a cave system can be found. It leads directly into the restricted parts of the castle. A secret passage from the governors suite leads into these caves as well. It has been used by Governor Fortunata ap Dugal herself to sneak out of the castle. In an effort to prevent someone from sneaking in, River Trolls were made to inhabit it.

The castle was once home to the Imperial Prefect and Count of Anvil, Count Ephrem Benirus. He was a loyal subject of Emperor Leovic and had the Emperor over for visits frequently during summers.[source?]

Anvil Lighthouse is situated on a small peninsula southwest of the town, south from the Anvil Wayshrine. Ground level of the lighthouse and a Skeever-infested cellar have been left unlocked.

The lighthouse is surrounded by dark rumors. Some vague evidence that the previous family of residents have been murdered by the Dark Brotherhood can be found. Keeper of the lighthouse refused to play along the local mob to sink ships coming into harbor, setting himself up as a target for a contract.[source?]

Local headquarters of the Gold Coast Trading Company is located at the western part of a city, overlooking the residential square. Much like other guilds the headquarters are located in a relatively large manor house.

Gold Coast Trading Company was once a very influential guild of merchants. It has several operations in the Gold Coast and elsewhere. It played a large role in the Red Sails invasion, as the current Governor Fortunata ap Dugal was once a member of the merchant faction. Under her rule, however, company has lost some of its influence.[source?]

Great Chapel of Dibella is a massive chapel dedicated to the divine Dibella located at the eastern part of the city, just by the southeastern gate.

The Chapel is one of the most popular tourist attractions in Anvil. Local worship of the goddess has changed over time and has now become far more reserved than elsewhere in Tamriel, to some visitors and resident disappointment. [source?] Half-naked priests can still be seen dancing inside the chapel.

"<A library's worth of paper has traversed this weathered notice board, but a few fresh bounties have been recently afixed.>"
―Anvil Bounty Board[src]

Anvil's Bounty Board can be used to take daily, repeatable quests related to the Gold Coast locations. As a reward the player receives [?]. 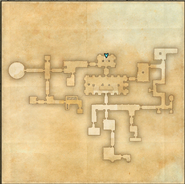 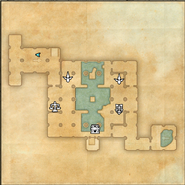 Español Français Русский
*Disclosure: Some of the links above are affiliate links, meaning, at no additional cost to you, Fandom will earn a commission if you click through and make a purchase. Community content is available under CC-BY-SA unless otherwise noted.
Advertisement