Arcanaeum Librarian is a creature card in The Elder Scrolls: Legends that is a part of the Return to Clockwork City expansion.

Arcanaeum Librarian is relatively unassuming. Its base stats are not very impressive, and its low health makes it easy to kill. However, the card gains in power every time you draw a card on your turn. For decks built around drawing a lot of cards quickly, Arcanaeum Librarian can become tremendously powerful.

Try playing him in the Shadow Lane to avoid being picked off early. You might also want to protect him with guards. You can also buff him with cards or other buffs, or protect him with wards to keep him alive longer. 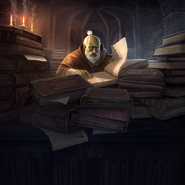 Retrieved from "https://elderscrolls.fandom.com/wiki/Arcanaeum_Librarian?oldid=2939525"
Community content is available under CC-BY-SA unless otherwise noted.