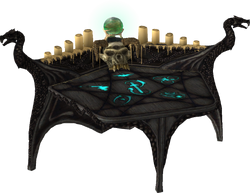 For other uses, see Arcane Enchanter.

The Arcane Enchanter is a magical table that allows the Dragonborn to create their own magical items and learn the enhancements from other items by disenchanting them. The Enchanting skill heavily affects the results of working at one.

Most enchanted items can be disenchanted, granting the Dragonborn the knowledge of how to place the effect on other non-enchanted items, but destroying the object in the process. Staves and Amulets of the Nine Divines as well as some unique items remain enchanted permanently, thus some unique effects cannot be replicated. Disenchanting also increases the Dragonborn's enchanting skill.

Learned enchantments can be applied to most mundane equipment making them magical. Most enhancements can be only applied to certain pieces of equipment, such as damaging enhancements to weapons. Most enhancements' strength depends on the size of the soul in the soul gem used and the Dragonborn's enchanting skill and active perks, especially the Enchanter perk level. Also several mage perks affect the outcome as can potions and, with Dragonborn, certain pieces of apparel. For an item to have more than one enhancement the enchanting skill perk Extra Effect needs to be active.

The enchanter must select the desired effect or effects, a mundane item that will be enhanced and a filled soul gem. After the third component is selected, the item's name can be changed by pressing F  PC  , Y  360  , triangle  PS3  , or X  NX  . Soul gems with greater capacities will naturally cause a much more pronounced effect than those with a smaller capacity.

After the enchanting process is complete the item's damage and armor rating can only be improved with the perk Arcane Blacksmith.

There are 17 weapon enchantments available, 18 with Dragonborn, that all have a variable number of charges. Each time the weapon's enhancement is applied to its target, it loses one charge until it runs out after which the magical effects are no longer active. Weapons can be recharged by using souls from filled soul gems and recharging increases the enchanting skill by a fixed amount. Weapons can also be recharged with Soul Siphon. Some enhancements' effect can be adjusted to be weaker thus increasing the number of uses.

The types of enchantments allowed on apparel are determined by what part of the body the apparel is covering. Unlike weapon enchantments, apparel enchantments do not require recharging and stay enchanted indefinitely. The strength of the enchantment is dependent on the size of soul used to enchant it and the enchanter's perks and skill, except for muffle and water breathing.

Arcane Enchanters are located throughout the realm, in most cases in the vicinity of a powerful mage. There is one in most jarl's headquarters and one can be purchased or crafted for all the Dragonborn's homes except for Breezehome.

The Enchanter can be crafted for a homestead as part of Hearthfire. It requires the following components: