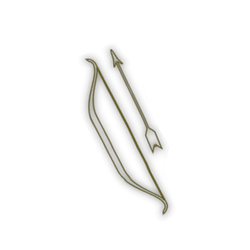 For Archery in other games, see Archery.

Archery is one of three offensive weapon-based skills in The Elder Scrolls V: Skyrim. The Archery skill is raised by and governs the use of bows and crossbows. Archery benefits from The Thief Stone (Though it appears under the warrior stone on the skill tree simply because it is the last thief stone affected skill on the warrior side, such as enchanting is on the mage side). Users of the skill, such as archers and hunters, are trained in the use of bows and arrows. The greater the skill, the more deadly the shot. Archery provides low health and lightly armored characters the means to engage foes from a safe distance and allows repeated sneak attacks.

A bow is a flexible, bent or curved ranged weapon, strung taut from end to end with a string. Arrows are nocked into the string and then drawn. The string is then released, propelling the arrow forward. The weight of the bow dictates the effort required to pull the string back, or "draw." The heavier the bow, the longer it will take to fully draw. The longer the amount of time taken to fully draw a bow, the more damage a shot will do, and the faster and farther an arrow will travel. While a bow is drawn, movement is reduced significantly.

Bows can be found in stores all over Skyrim. Most stores that sell them are dedicated to selling ranged weapons, mostly carrying both bows and arrows as well as certain light armor a character may use. Many different creatures carry variants of bows, including the draugr found in most dungeons and caves in Skyrim. Some bandits, which can be found in places ranging from camps to keeps, also carry bows and arrows. Bows, like swords, get stronger depending on what they are made of.

A crossbow consists of a bow mounted horizontally onto a mechanical stock. The bow string is pulled back onto a catch which holds the string taut. A bolt is then loaded into a groove in front of the catch. When a lever located at the bottom of the stock is pulled, the catch is released and the bow string pushes the bolt forward. Crossbows are slower to reload than most bows are to redraw, but they shoot projectiles at a higher velocity than most bows. They still however have the same reduction of speed while reloading. Crossbows make a noticeable sound when fired and nearby enemies may become aware of the source, but are still useful for stealth attacks due to their high damage. The slightly lower rate of fire when compared to standard bows is less important when a character is able to kill their target on the first hit. Crossbows are generally more expensive than their bow counterparts.

There are two types of ranges for both bows and crossbows: arc range and maximum range.

"Keep that arrow in your quiver, Archer..."
―Hold Guard

The arc range varies between each type of bow and crossbow. It is directly proportional to a bow's/crossbow's firing velocity.

Bows always fire in an upwards arc, propelling the arrow slightly upwards. A bow with a high firing velocity will have a long arc range. When fired from a high velocity bow, the arrow will continue traveling in an upwards arc for a longer period of time, and will eventually start to drop and arc slightly downwards. After this, the arrow will eventually come to a point in which it drops steeply and its horizontal speed decelerates immensely. If in the air for a long enough period of time, the arrow will have lost all horizontal velocity and fall completely.

This works similarly for crossbow bolts, however when bolts are fired they are not propelled in an upwards arc. Instead, they will travel straight from the Crossbow. Because they don't travel in an upwards arc, they will begin to drop immediately and will enter a steep downwards arc earlier than that of an arrow.

The maximum range is a range that is universal for both bows and crossbows. It is the maximum range an arrow or bolt will travel from the Dragonborn before it stops doing damage. This range usually occurs around 60–65 meters. At this point, all arrows and bolts will do no damage to the target, regardless of whether or not the target is in rendering range of the archer. Arrows and bolts that hit a foe past this range will most often clip through them and continue traveling until hitting an object (i.e. a tree, the ground, etc.). A non-hostile character will not become hostile when this happens, however an already hostile character will immediately begin to look for the Dragonborn if the projectile lands close enough.

The following books provide a permanent one-time increase to the Dragonborn's Archery skill. See each book's page for a list of possible locations.

The following individuals can increase this skill by giving them gold:

The following are the confirmed weapons that benefit from this skill. Damage, weight, and value are base values, independent of skill level and perks.

All crossbows are craftable and are a part of The Elder Scrolls V: Dawnguard only

"The wise hunter knows that preparation is the key to success, and you certainly don't want to hunt any trolls unprepared!"
―Finn[1]

The equation governing skill gain in Archery is thought to resemble something like this:

Thus, this relies on a damaging hit being scored. Therefore, to gain experience, the target must have health points, and that the attack must take away health (so no experience is gained if they nullify damage with a block or dodge).

Upon a damaging hit, the skill experience gained is based on the Base weapon damage and the Base ammunition damage. Therefore an excellent bow and arrows with high damage will level the skill most rapidly "per shot," but if the goal is to achieve the most leveling "per enemy" then basic iron arrows will provide the most total skill since the portion of the damage absorbed by the target's armor still counts toward the skill. The equation ignores perk increases, sneak multipliers, damage boosts from enchantments, or fully drawing the bow. As a result, firing arrows rapidly into a target will yield just as much experience per shot as a full or overdrawn shot. This will therefore result in more experience being gained from a single target, and faster gain, by using quick and weak shots (and poorer quality arrows), since the target will survive more of them.

The division by x is to represent that the base damage is not directly translated into skill experience. Currently, the actual value is unknown.

A Bound Bow will also allow one to increase Archery, as well as provide free arrows.

One method of leveling is to sneak attack the Greybeards at High Hrothgar. Find one of the Greybeards (preferably in the main area meditating), behind them at short distance, and simply shoot over and over (waiting a few seconds between shots yields sneak attacks, which will train Sneak at the same time). This can also help leveling Restoration with the use of the Healing Hands spell. (Using melee or magic will result in angering them.)

Another good target for training is Shadowmere, who has very high health, cannot die permanently, and will not fight back. However, this method requires significant progress in the Dark Brotherhood quest line.

Another way to quickly level Archery also requires joining the Dark Brotherhood. Upon entering the Falkreath Sanctuary, jump onto the ledge that oversees the pool and training area. This can be done by jumping from the nearby staircase. Once on the ledge, wait until Veezara sits on the ground, completely in view, and then enter Sneak mode and shoot him. As it is unlikely that anyone will see this, it's possible to fire constantly, training both Archery and Sneak steadily. A similar technique can be used on Cicero.

A different method is to visit the special archery trainer, Angi, who lives in a cabin in the southwest corner of the map by Falkreath. She trains in archery for free by letting the Dragonborn shoot at targets with special practice arrows. Completing her training will grant a total of six free levels. This is best done with a high Archery skill, since like any other trainer, each boost bumps the Dragonborn's skill up to the next level, ignoring the experience required to reach it. Training with her at level 94 will allow maximizing the skill, skipping the final six levels, which would normally require the greatest amount of time to complete.

A free method of training would be to train with Niruin in the Thieves' guild. He is a master trainer, and can train you up to level 90, though after 50 his training can be expensive. It is suggested to approach him while he's in bed and have 800 gold with you, so you can wake him up, train, let him lie back down, then steal the gold from him. While boosting your archery, this also levels your pickpocket skill. Doing this is suggested with Niruin because even if he catches you stealing, he will not become hostile with you. This can also be done with companions that train archery, allowing you to take your money back.

Deutsch Español Français Bahasa Indonesia Italiano Nederlands Polski Português Русский
*Disclosure: Some of the links above are affiliate links, meaning, at no additional cost to you, Fandom will earn a commission if you click through and make a purchase. Community content is available under CC-BY-SA unless otherwise noted.
Advertisement