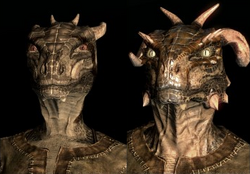 "This reptilian race, well-suited for the treacherous swamps of their Black Marsh homeland, has developed a natural resistance to diseases and the ability to breathe underwater. They can call upon the Histskin to regenerate health very quickly."
―Racial description[src]

Enigmatic and intelligent, the Argonians are experts at guerrilla warfare, and their natural abilities suit their swampy homeland, Black Marsh. They have developed immunities to the diseases that have doomed many would-be explorers in the region, and they are capable of easily exploring underwater locations due to their ability to breathe underwater. Argonians make proficient thieves, due to their increased lockpicking and sneaking skills.

After conquest of the Dunmer province of Morrowind, little is known about the politics of the Argonians in the Fourth Era. There is an Argonian political faction called the An-Xileel, but there is little information about them, except they are composed of mostly, if not all, Argonians, and that they pushed back Mehrunes Dagon's forces during the Oblivion Crisis in Black Marsh, and were also the faction responsible for orchestrating the conquest of Morrowind.

In Windhelm, Argonians are sequestered from the predominantly Nordic population, and are forced to live at the Argonian Assemblage, located at the city docks. After the mass exodus of Dunmer and Argonian peoples to Windhelm, the citizens became suspicious, worrying that the immigrants would influence or otherwise dilute their culture, and so forced them into segregation. Largely, this extreme behavior was inspired by the political confrontation between the Empire of Tamriel and the rulers of Skyrim. However, this eventually just turned into blatant racism.[1]

Despite the estrangement between the Nords and the Argonians, they are more respected and tolerated in Skyrim than other foreign immigrants due to their beneficial contributions to Nord industries. This beneficial assimilation to Skyrim's economy has helped some Argonians—such as those found in Riften—ingratiate themselves to Skyrim's aloof society.[2]

Unlike the citizens of Skyrim, who prefer to marry using an Amulet of Mara, some Argonians adhere to their native marriage traditions. In Black Marsh, it is customary to present a lover with an Argonian Wedding Band, which is crafted by the courting member. Each ring is unique and has personal meaning to the creator and the recipient.

"In Black Marsh, tradition dictates we present a potential mate a unique wedding ring to represent our future bond."

"Every Argonian wedding proposal band is supposed to have three flawless amethysts as part of their design. Two of the gems, the ones on the outside, represent the couple to be married... one for the husband, one for the wife. The amethyst in the center represents The Hist, the entity that all Argonians consider a sacred part of our lives." – Talen-Jei[3]

The Argonians' stealth and lockpicking make them brilliant assassins, thieves, scouts, and ambushers. Their lack of combat bonuses in archery and one-handed weapons can be overcome by natural skill leveling and play. Argonians can be used fairly well as spellswords, but conjuration training may be necessary. They can also be useful mage-thieves due to their skills in both magic and stealth, though one may want some illusion training. Their Resist Disease ability allows them to become somewhat immune to biological agents without requiring any enchanted apparel with the effect.

Argonians have unique advantages due to their natural waterbreathing ability. This gives them an all-terrain versatility in an area that other races need magic, potions, or enchanted gear (such as Volsung's mask) to fill. Argonians are able to make ample use of Skyrim's waterways as a means of quick travel, free from ambush and interference (for example, traveling from Riverwood to Whiterun by river can be quite expedient and avoids roadside hazards including wolves, bandits, and assassins) and also a quick means of escape should they find themselves in a dangerous situation that they cannot handle. River travel has its own share of hazards, however, such as waterfalls, rapids, and hostile animals such as Slaughterfish and Mudcrabs. Nonetheless, the Argonians can also be quite a "tank" in battle because of their Histskin ability that multiplies their health regeneration ten times.

The following is a list of some of the more notable Argonians that can be found in Skyrim:

A photo of an Argonian hand.

An Argonian with fire magic. 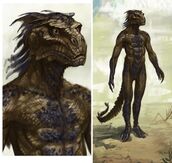 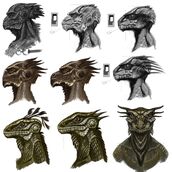 See more discussions >
Retrieved from "https://elderscrolls.fandom.com/wiki/Argonian_(Skyrim)?oldid=2999246"
*Disclosure: Some of the links above are affiliate links, meaning, at no additional cost to you, Fandom will earn a commission if you click through and make a purchase. Community content is available under CC-BY-SA unless otherwise noted.