Not to be confused with Irkngthand or Arkngthamz.

Arkngthand is a large Dwemer Ruin found in The Elder Scrolls III: Morrowind. The ruin is located in the Molag Amur region due east of Balmora and slightly northeast of the Moonmoth Legion Fort. The towers of the ruins can be seen above ground, but most of the maze-like structure is underground. There are six different sections within and some feature pools of lava running through them. The upper part of the building is inhabited by bandits, and the locked, lower level is guarded by Dwemer animunculi and Dwarven spectres.

Note: Cells of the Hollow Hand is two separate areas. Both can be accessed from the Hall of Centrifuge using different doors.

The Nerevarine must retrieve the Dwemer Puzzle Box for Hasphat Antabolis, before he will tell them more about the Sixth House.

Map showing how to get from one sublocation to another 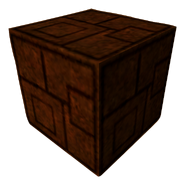 Retrieved from "https://elderscrolls.fandom.com/wiki/Arkngthand?oldid=3073265"
*Disclosure: Some of the links above are affiliate links, meaning, at no additional cost to you, Fandom will earn a commission if you click through and make a purchase. Community content is available under CC-BY-SA unless otherwise noted.