Armor of the Construct is a named item set found in The Elder Scrolls Online. Owners must actively wear three set pieces to receive a special bonus enhancement and five set pieces to receive the full Set Enhancement. Item values, level, and stats vary from item to item and are influenced by character skills, magical bonuses, and decay.

(5 Items) Armor of the Construct 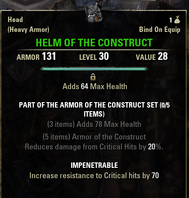 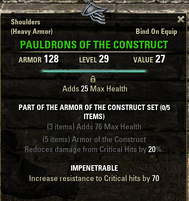 Retrieved from "https://elderscrolls.fandom.com/wiki/Armor_of_the_Construct?oldid=2858958"
*Disclosure: Some of the links above are affiliate links, meaning, at no additional cost to you, Fandom will earn a commission if you click through and make a purchase. Community content is available under CC-BY-SA unless otherwise noted.