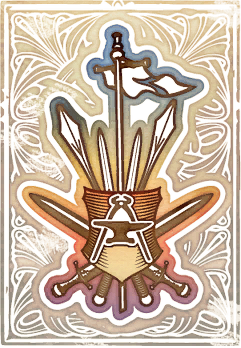 For other uses, see Armorer.

The Armorer skill determines the effectiveness while trying to repair damaged weapons and armor. The Hero can increase the skill level by attempting to fix their own damaged equipment rather than taking it to a smith for repairs. Repairs attempted with the armorer skill are augmented by repair hammers.

It returns in The Elder Scrolls V: Skyrim as a skill called Smithing.

"Long days and nights at the forge make you strong and tough. You are now a Journeyman Armorer. Using repair hammers, you can now fully repair magic weapons and armor."
―Journeyman Level

While it may seem like a simple 'trade' skill, Armorer is crucial for any combat intensive character. Especially for long combat runs, like when closing Oblivion gates, armor and weapons will fall apart quickly. Having a high armorer skill will allow repair of enchanted items, and repair them past their original usefulness. Also, repair hammers are heavy (they weigh a pound each), and the lower the armorer skill, the more hammers will be needed to carry during each raid (because they break more often for low-level armorers). Being a master in armorer will allow the need for only one repair hammer, as it no longer breaks.

Long days and nights at the forge make you strong and tough. You are now an Apprentice Armorer. Your repair hammers now last twice as long. You cannot repair magical items yet.

Long days and nights at the forge make you strong and tough. You are now a Journeyman Armorer. Using repair hammers, you can now fully repair magic weapons and armor.

Once one's Armorer skill level reaches 70 or higher, NPCs will say: "You've got the hands of a smith. Must have spent some time repairing your gear."

Armorer helps raise Endurance which in turn raises maximum health. Without this skill, armor will often be completely worn down by the time a dungeon is completed. The expert perk in Armorer raises overall protection, and damage output. The master skill perk makes repair hammers unbreakable.

Retrieved from "https://elderscrolls.fandom.com/wiki/Armorer_(Oblivion)?oldid=3142217"
*Disclosure: Some of the links above are affiliate links, meaning, at no additional cost to you, Fandom will earn a commission if you click through and make a purchase. Community content is available under CC-BY-SA unless otherwise noted.