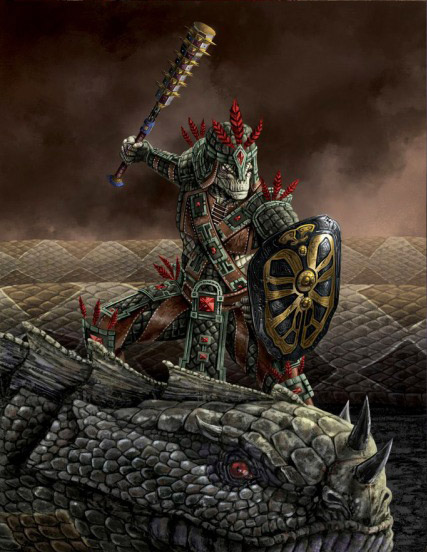 Guildmaster Sees-All-Colors is a fine zealot, fiercely dedicated to the preservation of her swamp and opposition of the Planemeld. Her destruction of dark anchors and vengeance against the invading Daedra is most commendable.

Until the cataclysm forced our races to bond, Argonians who journeyed far from home seemed happy to wear whatever protection they could trade from other races, perhaps as a sign of their subservient history. But venture into the unpleasant and dripping heat of Black Marsh or observe a more recent encounter with the lizard folk that scuttle along our southeastern border, and you will see their distinctive garb of war. This is a wonderfully primordial collection of roughly sewn elements, brightly colored from the mud and sap of their realm, tattered but tough armaments adorned with a variety of vicious prongs and sharp, fanged serrations, all captured in segments of concentric patterns that imitate the carvings that adorn their strange, stepped pyramids. The Argonian shellbacks, a formidable fighting contingent now beginning to find their footing in this great war, favor heavier protection. Such armor features splashes of vivid color, apparently the squeezed and ground insides of beetles native to the habitats of the lizard folk.

An appreciation for the slaughter of indigenous animals is evident here: giant rodent skins are battered into tough leather, with coral adornments and turtle splints to complete the basic look of a warrior. More ferocious creatures have their skins torn off for weightier armor; the Argonian favors the crocodile, wamasu, or giant snake. Cowrie shells, mudcrabs, and perhaps most alarmingly, evidence of the bones of men tie the assemblage together. An Argonian fighter seems to have stepped out from the great, carved temples of the bog, and the weapons they wave share a similar construction. A wonderful, primitive motif marks many an Argonian's weapon: strange reptilian faces carved into the hilts and pommels and painted with the same degree of garishness. Shields are oval stitched skins and turtle shells. When not seeking protection from their helms, headdresses of leather, jadegrass, and feathers are a common sight, especially adorning priests or hose dabbling in swamp magic.

Argonian arms have a thick, unsubtle, primitive ponderosity, wearing well in the humidity and filth of the marsh but surprisingly balanced in practice.

Retrieved from "https://elderscrolls.fandom.com/wiki/Arms_and_Armor_of_the_Argonian_Champion:_Sees-All-Colors?oldid=2759498"
*Disclosure: Some of the links above are affiliate links, meaning, at no additional cost to you, Fandom will earn a commission if you click through and make a purchase. Community content is available under CC-BY-SA unless otherwise noted.