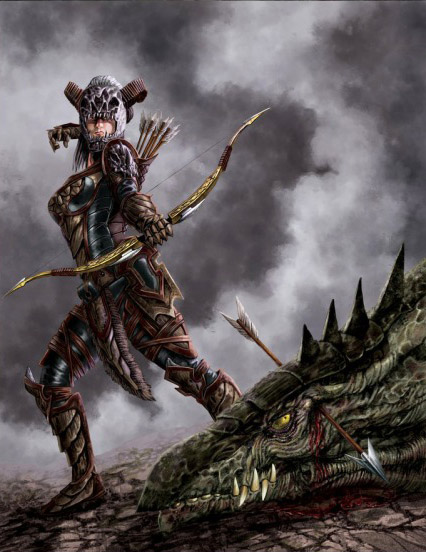 A Bosmer, a bow, and a slain Daedra: A plentiful sight within the forests of Valenwood. Gosellaneth has a grace and litheness most charming to the eye, but a stink of smoked fungus most unbecoming.

The Bosmer have a rather amusing wonderment for nature, and were this simply a predisposition to frolicking in the forests, I would have no cause for concern. But the Wood Elf's veneration for the dappled sapling and the delicate moss extends to an almost crippling disregard for cultivation and management of their bounteous resources. For despite being surrounded by the finest graht oaks in the land, no Bosmer is permitted to craft arms or armor from plants. However, just as they enjoy the fermented pig's milk of Jagga and the smoky intoxication of dried caterpillar, there are ways to solve the riddle of the Green Pact. Without wooden arrows or shields, a Bosmer will descend upon animals like a rabid skeever on a shipmate's toe. Beware the curse of being a forest creature in Valenwood, as your life is likely to be brief, and your corpse parts skinned, flayed, fiddled with, and generally put to use; there are never remains for the maggots.

Expect to see a Wood Elf clad in leather, shell plates, and occasionally antlers, with skulls for helms and other bones for fancy ornamentation. For more robust protection, strange insect resins and equally odd alchemical additives are combined to color and stiffen the plackart and fauld.

As forge fires are banished from the realm of the Bosmer, hand weapons made from metal are rarely used within Valenwood. When a bow is out of reach, expect an axe, spear, or blade shaped from jagged glass or flint stone, grasped with a primitive hand holding a primitive bone handle. No, it is the bow for which the Bosmer craftsman is rightly revered: Cunning concoctions of honey vinegar, brought to the boil before other secretive elements are added, improve the flexibility of the bone stick, and the time submerged greatly affects the form of the stick. Until the recent truce, most bowstrings were fashioned from Khajiiti gut.

The arming of a Wood Elf involves the polishing of flint, the melding of metal, the chiseling of bone, and the fusing of glass into elegant shapes. Or the purchasing of a wooden weapon crafted by another race.

Retrieved from "https://elderscrolls.fandom.com/wiki/Arms_and_Armor_of_the_Bosmeri_Champion:_Gosellaneth_Sight-Unseen?oldid=2759499"
*Disclosure: Some of the links above are affiliate links, meaning, at no additional cost to you, Fandom will earn a commission if you click through and make a purchase. Community content is available under CC-BY-SA unless otherwise noted.