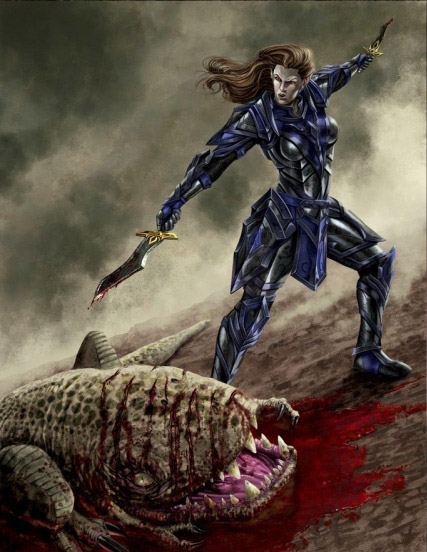 Armory Sergeant Belderi Llenim of the Mournhold Guildhall was always fascinated by armor, but her knowledge borders on the pedantic, as she offers hours of chatter about Nord tower shields and advice on keeping the edge on a glass sword.

For as long as anyone can remember, the Dunmer have made their lot in Morrowind, with its lush fungal valleys and serene grasslands, as well as the choking climes and ash deserts closer to Red Mountain. A Dunmer's armor matches his mood: brooding, sharp edged, and dark. Sharing the same traits as other mer, their armor designs have a certain fluidity and grace in their sweeping curves but lack the overbearing pride of the Altmer. Dour colors of cloth, volcanic glass, and animal hides combine to provide a Dark Elf's tapestry of protection.

Though the Dark Elves may have a dalliance with ebony metals and strange Daedric symbolism, their motives appear to be contrary to the machinations of Molag Bal. Lighter armor is traditionally made from glass, a concoction of rare metals and volcanic resins. Conversely, some tribes employ a strengthening layer of giant insects, such as the assassin beetle, which is more comfortable across the back or loins. Netch leather is apparent in most straps, though the lowly Ashlander is more apt to covet such hides, compared to the high ordinator, who fashions his protection from dreugh hides, hardened with revolting waxy excretions (from the dreugh, not the Dunmer).

When the forge fires of Mournhold roar at their zenith, arms of the highest quality are crafted, always with a dark reflection of Morrowind, from the bent and chitin (and bludgeons carved from the limbs of harvested creatures), to the magical, glass-like ebony of Vvardenfell. Diagonal engravings bisect the flat surfaces of every axe, mace, and sword of the Dunmer. Such angularity extends to other apparatus too; there is a jagged edge to many surfaces, particularly prevalent in the designs of daggers, swords, and shields. Heraldry usually takes the form of a stylized insect glyph, seen, on almost every Dark Elf's quiver, but house symbols are also a common form of heraldry, signifying alliances within this realm that tend not to concern outsiders.

Fused metal, the carapace pieces of giant insects, guar leather, gems, glass, and obsidian: all are woven into the angular armaments of the Dunmer.

Retrieved from "https://elderscrolls.fandom.com/wiki/Arms_and_Armor_of_the_Dunmeri_Champion:_Belderi_Llenim?oldid=2926614"
Community content is available under CC-BY-SA unless otherwise noted.