Elder Scrolls
Register
Don't have an account?
Sign In
in: Books Copyrighted by Zenimax, Online: Books with Authors, Online: Guides, Books about Imperials 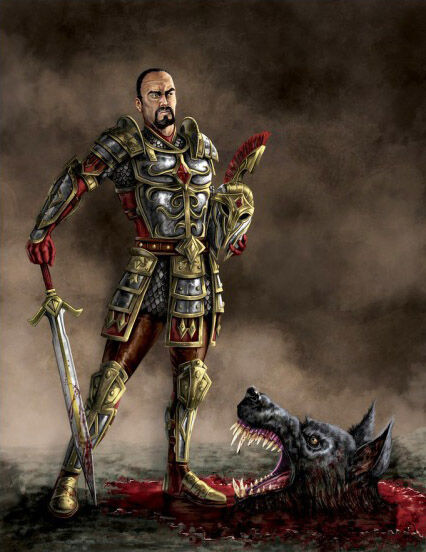 Though the Rimmen Fighters Guild battles formidably under my tutelage, I cut my teeth (and the heads from my enemies' shoulders) as a centurion of the Third Legion.

Colovian blood runs thick through my veins, and in keeping with the other attainments of my culture, the artisans of my people toil to create not simply armor, but protective artistry, unmatched in its solidity, practicality, and formality. While each piece is truly an accomplishment to announce with joy from the highest battlement, these fair pages attest to the excellence of our warrior's attire. Though the high Imperial silks are usually too expensive and are favored only by the mage or the elaborately dressed murderer, the undercloth is always elegant and never gaudy.

From the arrow's bodkin to the plumage atop the comb of our helms, the regimented leathers and steel of our military are often reclaimed and reworked by citizens of the Empire, resulting in a similar quality that recalls the nobility of the great Empire. Ancestral suits of armor of landed families are carefully preserved, and soldier irregulars don equally disparate pieces, whose ages sometimes differ by decades. Most common, though, are the shining symbols of legitimacy known to friends and foes alike: Classic horsehair helms with flexible cheek guards, deep red cloth, and gold clasps, and leather sandals tanned from the finest cattle. A miscellany of golds, shining silver steel, and crimson or purple hide work are a marvel of suppleness and vigor.

Our weaponry is a vicious vision of red, silver, and gold. Shields may bear the Imperial crest or a fine ruby encased in bronze, gold, and the lacquered wood felled in our bounteous forests. Wherever possible, red leather is wrapped around grips, to further realize the uniformity 'tween arms and armor. The axe heads, whether double bladed or not, have designs of red and copper, pommels embossed with intricate carvings, sometimes extending to the surfaces of our maces and axes, where the animal symbols of our major cities may be seen (such as the wild stag of Bravil or the prancing horse of Leyawiin). Our Empire is most glorious.

Swords, daggers, axes, maces, and bows: all wielded on the battlefield during our golden age and used to propagate the will of Akatosh. The Empire shall never be sundered!

*Disclosure: Some of the links above are affiliate links, meaning, at no additional cost to you, Fandom will earn a commission if you click through and make a purchase. Community content is available under CC-BY-SA unless otherwise noted.