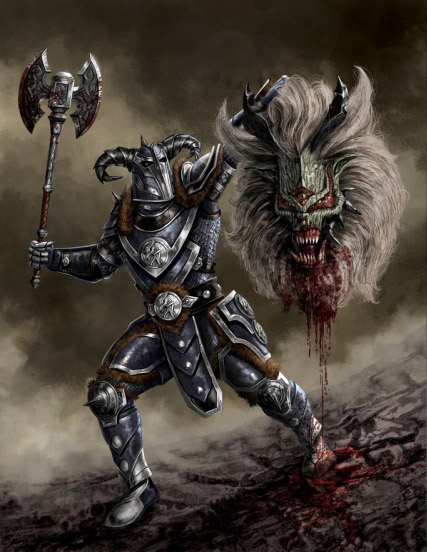 One of the veteran guards in the walled city of Windhelm, Skegglund suffers neither fools nor trolls gladly. He hunts in furs and leathers; he donned his heaviest armor for this display of brutality in honor of Kyne the Sky Goddess.

Though a Nord may share his complexion and traits with a Breton, he tends to shun a refined and delicate battle attire; instead he favors a more stark and furrowed appearance—not quite the look of a man dragged through a bramble hedge, but almost as unkempt. The Nord warrior is proud of his fierce independence, hardy in the thankless severity of his lands, and comfortable with appalling violence as a daily occurrence. His armor and weaponry reflects this boisterous fury, but may also be revered as part of a family's trappings. For the Nord is a warrior race, and all from the goat farmer to the Skald King own an armament of some kind.

Under the braids and beard, but resting on the woad tattoo, lies a Nord's armor. Usually lined with fur (to help contain heat and prevent nasty chafing), and with leather trim work with steel plates attached to the top, the results are weighty and foreboding. Clash with a Nord in his heaviest armor, and your fears of intimidation are realized. Since the time of King Harald, horkers, mammoths, wolves, and great cats have been sacrificed to provide undergarment protection, with thousands of forges throughout the six holds of Skyrim crafting fine plate for a race perpetually at war.

Weapons are thick and practical, with strong oak hafts favored for the hand axe, mace, or staff, sometimes wrapped in a leather grip. Usually, swords are formed from steel, with stocks cross guards, sometimes adorned with runes or the fabled knot work also found carved into windswept longhouses across this realm. Strange, glaring semblances of bears, eagles, or elk may stare out from a Nord's shield, but others robust rivulets hammered into wood, with concentric or reflective patterns, like the cross of Ysgramor. A Nord's weapon is seemingly an extension of his arm, and he usually only stops wearing it during his (frequent) bouts of revelry, where it is replaced by a jug of four-eye grog or rum posset.

From the fiendish toothpick to the elaborately rune-encrusted great sword, Nord weaponry has a rugged but exceptional quality, thanks to the heat of their forges and the competence of their red-faced blacksmiths.

Retrieved from "https://elderscrolls.fandom.com/wiki/Arms_and_Armor_of_the_Nordic_Champion:_Skegglund_Stormcloak?oldid=2981263"
*Disclosure: Some of the links above are affiliate links, meaning, at no additional cost to you, Fandom will earn a commission if you click through and make a purchase. Community content is available under CC-BY-SA unless otherwise noted.