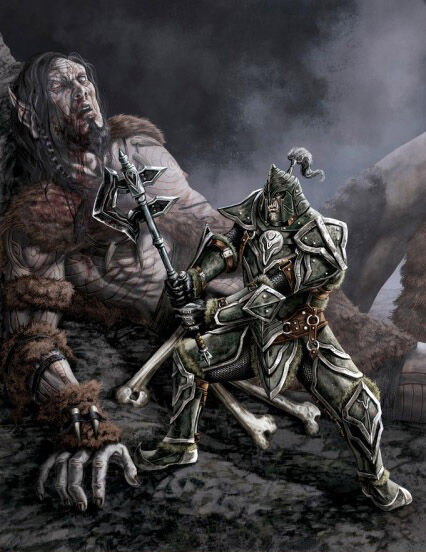 Gushagub favors the horrific wounding power of his two-handed axe, "Mauloch's Maw." He recently demonstrated its fortitude by bringing a giant to its knees with a leg severing that was as quick as it was horrific.

Slowly winning the begrudging respect of the Empire, the barbarian beasts of the Dragontail and Wrothgarian Mountains are more at home than most on the frontlines of a battlefield. Though many of the more cultured races still harbor resentment of their boorish ways, and one never talks to an Orc without hearing a brooding, oppressive moaning, their forges rage with deep heat. Indeed, their craft work reveals a heft no other blacksmith can match, a product of the Orc's historic hardships, cunning resolve, and brutish power.

If you are of a more dainty disposition, Orcish armor is not appropriate attire for you. I've seen a previously sturdy Argonian struggle into an Orc's thick plate, be struck about the face and nethers as he attempted to turn on his assailants, and collapse under the sheer weight of his protection. Even Nords fare little better, red checked and cursing after minutes of combat practice clad in this deluge of steel. But the Orc, who has worked with the tremendous weight of his armor since childhood and has the frame to carry it, shrugs off the chafing and immobility as just another hardship to endure.

Orcish armor is thick and functional. The edges are sharp and jagged, as there is no word in the Orcish tongue for delicacy. Gauntlets and sabatons are punctuated with sharp spines to provide further anguish to those punched, booted, or otherwise manhandled. To prevent self-inflicted wounds, fur is sewn into the folds, further increasing the bulk. For the veteran pulverizer, attempts at ornate design are made, with curved layers of steel under chain mail. Weapons are carried with pride and suffer from the same ludicrous lack of subtlety, although the cracked skulls of many a Falkreath Nord should leave one in no doubt of their effectiveness. Though Orcs tend to shun magic, they stare at enchantments as a dog might at a roasted beef steak, mesmerized by pretty colors and the prospect of additional savagery to inflict.

These lumbering tools of destruction often feature numerous references to the Code of Malacath, named for their great chief and arch bloodletter, or his grimacing face.

Retrieved from "https://elderscrolls.fandom.com/wiki/Arms_and_Armor_of_the_Orcish_Champion:_Gushagub_Gro-Shugdurbam?oldid=2759507"
*Disclosure: Some of the links above are affiliate links, meaning, at no additional cost to you, Fandom will earn a commission if you click through and make a purchase. Community content is available under CC-BY-SA unless otherwise noted.