Side quest
Arniel's Endeavor is a quest available in The Elder Scrolls V: Skyrim in which the Dragonborn must assist Arniel Gane, a fellow member of the College of Winterhold, in an experiment he is conducting to reveal the mystery behind the disappearance of the Dwemer.

"Arniel Gane has asked for help with a special project he's working on. Although he won't tell me what they're for, he wants me to bring him a number of Dwarven Cogs."

"The Dwemer, they were uhh, masters of magic in a way we can't even begin to conceive of. Their greatest achievement, however, has also been their greatest, shall we say... Mystery."
―Arniel Gane[src]

After completing the quest "Hitting the Books," the Dragonborn will have the option to ask Arniel Gane if there is anything he can be assisted with. Doing this will start the quest, which has four phases. Speaking to Arniel, who is located in the College of Winterhold, will reveal that he is working on a secret project and requires the Dragonborn's help.

Arniel will first ask the Dragonborn to find ten Dwemer cogs. Initially, he will not say what he wants them for. This quest may be started either prior to receiving the quest "The Staff of Magnus," or after that quest has been completed. After obtaining the cogs head back to the College.

This part will become available after the quest "Good Intentions" has begun. Before that, he will not speak about the Dwemer cogs at all.

After turning in the cogs to Arniel, he requests that Enthir be asked about delivering some purchased goods. After a discussion with Enthir, the Dragonborn is tasked with finding the Staff of Tandil at a random location (some are listed below), and returning it to Enthir as payment for a warped soul gem that is warped beyond the ability to be able to capture a soul.

Known locations of the staff include:

This part of the quest cannot be started until the quest "The Eye of Magnus" is complete.

Upon speaking to Arniel again, it is discovered that his project is going terribly. He claims to have forgotten to take into account the heat gain and has consequently destroyed his only working model.

It is at this point that he reveals he is attempting to discover how the Dwemer disappeared "instantly, and completely" by recreating the event. The parts the Dragonborn helped recover were made into a Dwarven convector, which broke during his last attempt to recreate the event. When asked if he wants to build another, he says that he would rather have the Dragonborn find the convectors, scattered throughout Skyrim, made by the Dwarves themselves. Arniel then teaches the spell required to heat the convectors (a novice Destruction spell). Three seconds of burning with the spell is all that is needed to heat the soul gem. Arniel postulates that by doing this, the Dwemer may possibly be contacted again.

Upon completing this part of the quest and returning to Arniel, the Dragonborn is thanked and told that the final piece will be arriving soon. 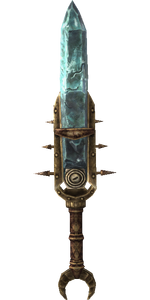 After leaving the College of Winterhold for a few days after dropping off the modified soul gem, conversing with Arniel again will reveal that once again Enthir is giving him trouble. When Enthir is asked about it, however, he claims that this time it is not actually his fault. He says he did not keep close tabs on this package because Arniel set up the delivery himself. Enthir suggests searching for the courier, and directs the Dragonborn to one of the following radiant locations:

Once the Dragonborn retrieves the package, which turns out to be the dagger Keening, and returns to the College and gives it to Arniel, he will give a brief monologue about what he is attempting to do, and then proceeds to hit the soul gem with the dagger. Eventually, there is an explosion of energy, and his body vanishes (similar to when the Dwemer vanished after Kagrenac used Keening and the other tools on the Heart of Lorkhan) leaving the Dragonborn with a completed quest and a Conjuration spell to summon Arniel's shade.