Arnitole is a Breton mage found at the ruins of Silaseli.

Assist Zaag in fulfilling a contract for Arnitole in Silaseli Ruins.

"Hello there. I suggest you don't try to pick me up. You'll only injure your back. Don't ask for any long-winded explanations either. It's tiring to talk when you're made of iron."

Why did you turn yourself into iron? "No choice. That brute was going to forcibly remove me from the ruins, and I can't leave yet. I have to get my emotions back under control first."

You don't seem that emotional to me. "Precisely. My emotions are gone—Fear, Anger, Happiness, Sadness—they got away from me, in the literal sense. It's this Ayleid relic here. It's a gateway into the Silaseli dreamstate, but by the time I realized it, my emotions were already gone."

Is there some way I can get your emotions back? "Yes. You could go into the dreamstate and convince them to come back. You'll have to upset them though, drive them to experience their counterbalanced state. Anger to Fear, Happiness to Sadness, that sort of thing."

I'll give it my best.

After bringing him together:

"Hm. For some reason, looking at you makes me want to vomit. My emotions just feel like they're going to burst out and run away again. Overall though, I am feeling a little lighter on my feet."

So you have all your emotions back? "I think so. I won't know for sure until I get home to my wife. Come to think about it, she's very similar to this Ayleid relic—she's old and strange and brings out all my emotions. Regardless though, I'm ready to go whenever your friend is."

Full-body while being iron 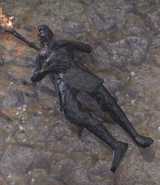 Retrieved from "https://elderscrolls.fandom.com/wiki/Arnitole?oldid=3047298"
*Disclosure: Some of the links above are affiliate links, meaning, at no additional cost to you, Fandom will earn a commission if you click through and make a purchase. Community content is available under CC-BY-SA unless otherwise noted.