Arpenia is a large, single-level Ayleid Ruin located in Blackwood, just off the Yellow Road and north of the Shrine of Nocturnal. Northeast is the Ayleid ruins of Atatar.

The only significant plants in the outdoors area are a few green stain cups and clouded funnel caps slightly to the west. It is possible that there may be a bandit or two in the area around the ruins.

Arpenia is a showcase for every Ayleid trap there is. Despite its size, it's quite deserted, with only rats and mudcrabs scattered around. There are a few Ayleid chests and casks from which to procure loot. Most of the casks contain leveled jewelry, coins, or potions, and there are no enchanted weapons to be found inside any of them.

Modryn Oreyn needs help finding out more about the Blackwood Company and their shady dealings and asks the Hero to join him in the hunt for what happened when he lost his men in an earlier mission. 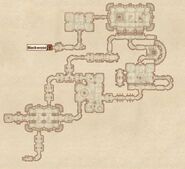 Arpenia
Add a photo to this gallery

Retrieved from "https://elderscrolls.fandom.com/wiki/Arpenia?oldid=2954818"
*Disclosure: Some of the links above are affiliate links, meaning, at no additional cost to you, Fandom will earn a commission if you click through and make a purchase. Community content is available under CC-BY-SA unless otherwise noted.