"Yes, the claw. I know how it works. The claw, the markings, the door in the Hall of Stories. I know how they all fit together!"
―Arvel the Swift[src]

Arvel the Swift is a Dunmer thief, found trapped in a spider web at Bleak Falls Barrow. Arvel wears a full set of hide armor. He is the primary antagonist of the quest "The Golden Claw."

The Dragonborn finds Arvel trapped in a spider's web, and he asks to be freed. As soon as he is freed, he attempts to escape through the dungeon. The Dragonborn must then chase after Arvel and retrieve the Golden Claw from his dead body. Upon searching Arvel's corpse, Arvel's Journal can be found.

"You did it. You killed it. Now cut me down before anything else shows up."

Where's the golden claw? "Yes, the claw. I know how it works. The claw, the markings, the door in the Hall of Stories. I know how they all fit together! Help me down, and I'll show you. You won't believe the power the Nords have hidden there."

Hand over the claw first! "Does it look like I can move? You have to cut me down, first."
Fine. Let me see if I can cut you down. "Sweet breath of Arkay, thank you."

"It's coming loose, I can feel it."
"You fool, why should I share the treasure with anyone?" 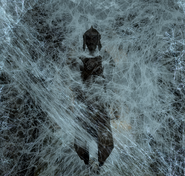 Start a Discussion Discussions about Arvel the Swift