"The Ascadian Isles is a region of lush, green, well-watered southern lowlands where most of Vvardenfell's agriculture is found. The area includes Pelagiad, Suran, Vivec City, and Ald Sotha along with the inland lakes and waterways of the Ascadian Isles proper."
―Anonymous[src]

Ascadian Isles is one of the nine regions that make up the island of Vvardenfell. The realms of Ascadia is where a majority of Vvardenfell's populus is located and is the political center of the entire sub-continent.

The Ascadian Isles is ideally an archipelago as it is made up several small islands such as the floating Vivec City Cantons and natural islands such as Elmas Island and the Isle of Ald Sotha. The town is home to many towns and plantations that are sprawled across these Grazelands like the plague. Common areas used for farms are along the shore of Lake Amaya and the minor lakes found across Ascadia such as Lake Hairan and Lake Masobi. The many houses of Morrowind, more specifically, House Hlaalu and House Telvanni use the land and the nearby cities of Vivec and Ebonheart for trade along the Inner Sea and beyond.

During the Interregnum in 2E 583, the city of Vivec was under construction and was half complete except for the House and Foreign Cantons. Vivec of the Tribunal had fallen ill and was slowly losing his divine power. Vivec tasked an Outlander called the Vestige to uncover the situation before Vivec loses power and the Baar Dau falls onto the city. Through weeks of manipulation and deception, the Hound of Clavicus Vile, Barbas had the Vestige bring Sotha Sil's artifact, the Sunna'rah to him and used it to substantially weaken Vivec's Power, resulting in his spirit to leave his body. Barbas' plan was to enter the Clockwork City to give Clavicus Vile the immense power of Sotha Sil. Vivec's lack of power caused the Baar Dau to fall onto Vivec City with great speed. The Vestige and Sotha Sil's apprentice, Barilzar traveled to the Clockwork City and defeated Barbas. Vivec's powers were restored, and the Baar Dau remained suspended in the air, albeit closer than before. The Baar Dau would later be used as the Prison of Vivec City and be renamed the Ministry of Truth.[1][2]

The leader of Suran, Marshal Hlaren became oppressive ruler that accused innocent citizens of ridiculous crimes to have them become slaves in her friend's plantations. A vigilante called the Scarlet Judge began to rise into action to deal with Hlaren's heinous actions. The Scarlet Judge and the Vestige investigated the situation to find proof of her actions. The Vestige was able to find hard evidence on Hlaren and was able to prosecute her, saving Suran. The Scarlet Judge disappeared after that, and no mention was made ever since.[3]

In 3E 414, the Vvardenfell Territory of the Tribunal was under Imperial protection as per order of the Treaty of the Armistice. No settlements were constructed in the territory other than cities built by the Great Houses of Morrowind such as the cities of Balmora and Sadrith Mora. It was until in 3E 414, that King Athyn Llethan of Mournhold revoked a Temple ban on trade and settlements in Vvardenfell. A new wave of colonization swarmed Vvardenfell and many settlements such as Caldera and Pelagiad. The capital of Vvardenfell, Vivec City, was soon populated by Imperial Politicians and eventually a new city was built alongside Vivec. The city of Ebonheart served as the seat of Imperial authority in Vvardenfell and leading the helm was Duke Vedam Dren.[4][5]

In 3E 427, the long-awaited Nerevarine Prophecy came to fruition, and it resulted in the death of Dagoth Ur, Sotha Sil, Almalexia, and the disappearance of Vivec. The Isle of Vvardenfell was Vivec's domain, his plane of Tamriel. From his personal city to the Northern Cape of Sheogorad, Vivec has many devoted followers and has power across the region. It is more emphasized in Vivec City where the city's maximum prison is the giant meteor floating above the city, just waiting to fall, called the Ministry of Truth or the Baar Dau. With Vivec's disappearance, the magic that left the Baar Dau suspended in the sky was diminishing and in 4E 5, the meteor continued to fall from the heavens, and it destroyed the city of Vivec along with a majority of the Ascadian Isles. The impact created a massive crater in Vvardenfell dubbed the Scathing Bay. The scale of the impact is unknown since Red Mountain erupted as a result of the crash. The area formerly called the Ascadian Isles is no more, it is simply the Ascadian Isles.[6][7]

Vivec City, the Jewel of Vvardenfell.

Ebonheart, the Seat of Imperial Power.

Ald Sotha, a Piece of the Past. 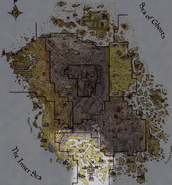 The Ascadian Isles in a map of Vvardenfell.
Add a photo to this gallery

Retrieved from "https://elderscrolls.fandom.com/wiki/Ascadian_Isles?oldid=3079586"
*Disclosure: Some of the links above are affiliate links, meaning, at no additional cost to you, Fandom will earn a commission if you click through and make a purchase. Community content is available under CC-BY-SA unless otherwise noted.