For other uses, see Ascended Sleeper.

The Ascended Sleeper is a type of creature found in Morrowind. They appear as hunched, purple-robed humanoids with mottled blue skin. Their most obvious feature is their grotesque four-eyed faces, which have long, thin tentacles in the place of a "mouth."

"What are you doing? You have no idea. Poor animal. You struggle and fight, and understand nothing."

understand nothing "You think what you do has meaning? You think you slay me, and I am dead? It is just a dream and waking, over and over, one appearance after another, nothing real. What you do here means nothing. Why do we waste our breath on you?" 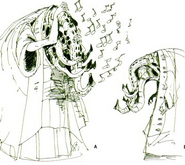 "Art of Morrowind" concept drawing by Michael Kirkbride.
Add a photo to this gallery

Retrieved from "https://elderscrolls.fandom.com/wiki/Ascended_Sleeper_(Morrowind)?oldid=2970753"
*Disclosure: Some of the links above are affiliate links, meaning, at no additional cost to you, Fandom will earn a commission if you click through and make a purchase. Community content is available under CC-BY-SA unless otherwise noted.