Not to be confused with Ghoul.
Main article: Ash Creatures

"The ash ghoul is a distorted, half-human, half-beast creature transformed by a mysterious force into a powerful magical being. Ash ghouls are highly intelligent, aggressive, and dangerous. Ash ghouls are associated in some way with the Devil Dagoth Ur"
―Creature Description[src]

The Ash Ghouls appear as hideous, grey skinned humanoids dressed in grey robes with a grey hood who, like Ash Zombies, have their upper face hollowed out. Unlike Ash Zombies, they have a wormlike proboscis growing in the cavity. They also have the ability to give the character Ash Woe.

A quest for the Mages Guild, given by Skink-in-Tree's-Shade.

"What? What use is speech? If you will not submit, you must be destroyed."

will not submit "You have chosen war with Dagoth Ur. We grieve for your loss, but we will not spare you. You refused the sweetness of Lord Dagoth's friendship. Now know the bitterness of his fury."

Dagoth Ur "He will not come to you, Lord Nerevar. It is you who must beg forgiveness. Go to him, beneath Red Mountain, kneel before him, and he will show you mercy."

After the death of Dagoth Gares:

"For our fallen brother, we claim our revenge."

fallen brother "The soul of Dagoth Gares is among us. You have broken his body, but his spirit is with us in our waking dreams." 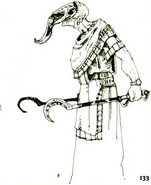 Retrieved from "https://elderscrolls.fandom.com/wiki/Ash_Ghoul?oldid=3148898"
*Disclosure: Some of the links above are affiliate links, meaning, at no additional cost to you, Fandom will earn a commission if you click through and make a purchase. Community content is available under CC-BY-SA unless otherwise noted.