Ash Zombie is a creature in The Elder Scrolls III: Morrowind.

Minions of the Sixth House, they are described by characters in the game as follows:

The ash zombie is a humanoid creature transformed by a mysterious force into a deranged beast. Though their skulls are apparently empty, these creatures are nonetheless intelligent, aggressive, and dangerous. Ash zombies are associated in some way with the Devil Dagoth Ur.

Unlike other Ash Creatures, Ash Zombies have no inherent spells or abilities, instead relying on the use of their Spiked Club. Ash Zombies are muscular gray skinned humanoids with a large bloody hole in the place of their eyes which shows their skulls are apparently empty. It should also be noted that they have pointed ears, meaning they could possibly be undead Elves, controlled by Dagoth Ur's magic. 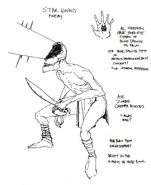 Retrieved from "https://elderscrolls.fandom.com/wiki/Ash_Zombie?oldid=2916905"
*Disclosure: Some of the links above are affiliate links, meaning, at no additional cost to you, Fandom will earn a commission if you click through and make a purchase. Community content is available under CC-BY-SA unless otherwise noted.