"The Ashlands are the dry, inhospitable wastelands surrounding the lower slopes of Red Mountain. The Ashlands extend to the Sea of Ghosts in the north, and elsewhere form a wide margin between the blighted Red Mountain region and other geographic regions."
―Anonymous[src]

The Ashlands is a dry, inhospitable wasteland on the isle of Vvardenfell, home to the native Ashlanders as well as the dangerous creatures of Vvardenfell. House Redoran has the city of Ald'ruhn as its district capital on Vvardenfell.

The Ashlands refer to the vast regions of ash that are surrounded by volcanoes or hit with a severe case of Ash Storms, another example of Ashlands would be the region of Stonefalls or the Southern portion of Solstheim after the Red Year. The Ashlands of Vvardenfell refers to the region that surrounds the volcano of Red Mountain in the center of Vvardenfell. The city of Ald'ruhn sits on the edge of the Ashlands, near the West Gash in the west. It was built around the carapace of a giant Emperor Crab called the Skar. It is also the Vvardenfell Capital of the Great House Redoran. The town of Maar Gan is further into the Ashlands and is a mining colony from House Redoran. The Urshilaku Tribe of Ashlanders have a camp located on the northern coast of the Ashlands, along with the Sheogorad Strait. The Ghostgate is a fortress settlement that guards Vvardenfell against the summit of Red Mountain.

During the Interregnum in 2E 583, the city of Ald'ruhn was originally a large Aslander camp located along the Foyada Drura. It was founded by a group of Ashlanders and members of House Hleran when they slew the ancient Emperor Crab named Skar using a mighty spear called Calderas. The village of Ald'ruhn was under the administration of Ashkhan Conoon Chodala and both Wise Woman Dovrosi and Wise Woman Asani. Chodala had come to the possession of an ancient artifact called the Sunna'rah. It was a powerful device created by Sotha Sil of the Tribunal, through foreign influence, Chodala believed he was, in fact, the Nerevarine of Prophecy. Chodala gathered the Red Exiles, a group of exiled Ashlanders and began to force the tribes of Vvardenfell to bow to his whim. Chodala, along with his sister Seryn and an Outlander named the Vestige arrived into the Under-Skar to show Chodala the truth and the consequence of his actions. He decided to ignore the warnings of the past Failed Incarnates and fled to the ruins of Kaushtarari where he died by the hands of the Vestige.[1][2][3]

Around this time, a Dunmeri mer named Drelyth Hleran arrived into the camp of Ald'ruhn to find his lost ancestral tomb in the Ashlands. Hleran asked the Vestige to help in his endeavor by becoming accepted into the Tribe. The Vestige traveled to the Shrines dedicated to the four Vvardenfell tribes and spoke with Wise Woman Asani as well as Farseer Kuamta. With knowledge from Asani, the Vestige found the Hleran Ancestral Tomb on the lava basin of Foyada Drura. Deep within the Tomb, the Vestige met the spirit of Dranoth Hleran, who told the story of the foundation of Ald'ruhn as well as the death of Skar, the Emperor Crab. Ald'ruhn was founded by the Ashlanders of Vvardenfell as well as the members of House Hleran. Dranoth used the legendary spear called Calderas to slay Skar and the Ashlanders settled along the carapace. With information, Drelyth was accepted into Ald'ruhn, and eventually more people came to Ald'ruhn. It eventually became the vast city of Ald'ruhn.[4]

In 3E 414, the Vvardenfell Territory of the Tribunal was under Imperial protection as per order of the Treaty of the Armistice. No settlements were constructed in the territory other than cities built by the Great Houses of Morrowind such as the cities of Balmora and Sadrith Mora. It was until in 3E 414, that King Athyn Llethan of Mournhold revoked a Temple ban on trade and settlements in Vvardenfell. The camp of Ald'ruhn was established as a large city under the control of House Redoran and used the carapace of Skar as the Manor District of Ald'ruhn. The town of Maar Gan was established north of the city and was built somewhere near the Bal Isra landmark. Ald'ruhn was ruled by Mistress Brara Morvayn and the Redoran Council of Vvardenfell. The Imperial stronghold of Buckmoth Legion Fort was built south of Ald'ruhn, near the ruins of Ramimilk.[5]

The Urshilaku Camp in the Ashlands.

The Ghostgate of Red Mountain protects the region from the Blight. 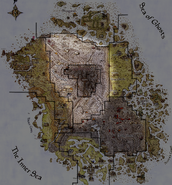 The Ashlands in Vvardenfell.
Add a photo to this gallery

Retrieved from "https://elderscrolls.fandom.com/wiki/Ashlands?oldid=3079576"
*Disclosure: Some of the links above are affiliate links, meaning, at no additional cost to you, Fandom will earn a commission if you click through and make a purchase. Community content is available under CC-BY-SA unless otherwise noted.