Not to be confused with Assumanu.

Assemanu is a Sixth House cave on a small island west of Hlaalu Canton. Assemanu is home to a large branch of the sinister Sixth House cult, led by a named Ascended Sleeper called Dagoth Hlevul, which is influencing people in Vivec City, Suran and as far away as the Arano Plantation.

Also in this cave is the Robe of St. Roris. The cave is quite dark and has ledges and bridges; levitation and some form of light is helpful here. The doors to the shrine are locked. An old key to open them is found on a dead Ordinator.

Having attained the rank of House Father in House Hlaalu, the Nerevarine may go to Duke Vedam Dren for a couple of quests which result, ultimately, in the Nerevarine being declared Grandmaster of the House.

While advancing through the quest "Antabolis Informant" and sleeping in Ald'ruhn, Balmora, or Vivec, the Nerevarine receives some disturbing dreams about Dagoth Ur. The second dream comes during the quest Vivec Informants and the last dream after the quest Zainsubani Informant. 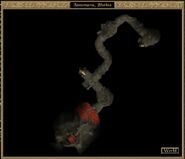 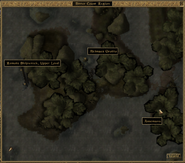 Retrieved from "https://elderscrolls.fandom.com/wiki/Assemanu?oldid=2968608"
*Disclosure: Some of the links above are affiliate links, meaning, at no additional cost to you, Fandom will earn a commission if you click through and make a purchase. Community content is available under CC-BY-SA unless otherwise noted.